Trainer Steve Searle has been coming to Springfield on a regular basis for the past three decades and the 2017 meet will certainly go down has the most successful and memorable one for the veteran Illinois horseman.

Searle sent out 10 horses at the Springfield meet and five of them ended up in the winner’s circle. All of his 10 starters earned a check and two, The New Americana and Ants Iner Pants, captured Illinois State Fair Colt Stakes Championships.

Does Steve remember having a Springfield meet anywhere as fruitful as this year’s?

“Not even close,” answered the 59-year-old resident of Grant Park, Illinois. “I’ve been consistently racing horses at Springfield for the past 24 years and never had a meet anywhere near the success we’ve had at this one. It was unbelievable” 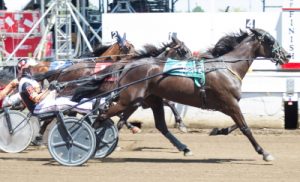 Searle’s five winning horses were second best to Mike Brink’s seven in the Springfield trainer standings. However, Steve’s 50 per cent winning clip was far and away tops among the leading trainers.

Searle’s horses also had two seconds, one third, and two fourths and raked in over $58,000 in purse money at Springfield.

“Did we really? I had no idea it was that much,” said the 59-year-old Wisconsin native.

“With so many of the big and successful stables leaving Illinois for a number of years now it’s opened things up for some of the smaller barns to make some good money with Illinois bred horses. Obviously I’m thrilled to do so well at Springfield.

“We aren’t doing anything different with our horses. We just have better stock now that some of the bigger stables have left,”

What about Du Quoin?

“I’ll have all of my Springfield horses there except for The New Americana,” answered Steve. “I kind of want to protect her. I think she could do well on Hawthorne’s Night of Champions so I won’t be sending her down to Du Quoin. I don’t want to overdue things with her.”

Searle was elated with the freshman trotter White Pants Fever’s romping victory in an IDOA race last Wednesday. The Lou’s Legacy filly drew off by an overwhelming 22-plus lengths in 1:57.4 without any urging from her driver Mike Oosting. The filly previously won 3 of 5 races on the Illinois County Fair Circuit.

White Pants Fever is owned by her breeders Flacco Family Farms and Searle. She’s by Lou’s Legacy out of the SJ’s Caviar broodmare Olives and Caviar.

“She had some health problems earlier that hopefully are behind her,” continued Searle. “We’ve brought her around slowly. She won her first start (July 1 at Knoxville) in only 2:17.

“She’s been getting sounder and sounder and I told Dr. Flacco, who has been so patient with her, maybe it’s time to give her a try at Springfield. If she does well there we’ll take her to Du Quoin and if she does well again, then its Hawthorne for their stake series. Maybe she has the talent to make the final there.”

Searle has also had a very enjoyable time driving on the Illinois Fair Circuit as well. He’s taken 27 horses to the gate and has 7 firsts, 7 seconds and 4 thirds, to earn a lofty Universal Driver Rating System mark of .531. His next driving win will be No. 1,300 of his career

Upset in Trot: Big Expense, driven by his trainer Kyle Husted, knocked off the 2 to 5 favorite Bankers Volo (Kyle Wilfong) in last night’s $13,500 Open Trot. Husted gave the 12-1 longshot a two-hole trip behind Bankers Volo who sprinted out from the assigned 10-slot in the six horse field and cut the fractions.

Big Expense ($26.80) rallied past in the late going for a neck victory in 1:56.2 and snatched his second straight win for Michigan owner David Brigham. Pridecrest (Jared Finn) finished strong for third, beaten by one length.

Can Banker Volo Cash In With Hawthorne Return? Doubling Up a Rewarding Experience
Scroll to top