Friday’s night’s pair of $12,000 second round stakes series legs of the Incredible Tillie for ICF pacing fillies appears to have a completely different look from one another.

The second division seems loaded compared to the first split that will go as tonight’s opener. All the current leaders in the eighth race leg will be knocking heads. They’ll vie for valuable points needed to be among the 10 highest for the $130,000 Final on Hawthorne’s September 23rd Night of Champions.

There’s Hosea Williams Rolling Coal (pp 2, Casey Leonard), winner of a first leg of the Incredible Tillie and the recent Violet stake champion. Right next to her is the Steve Searle Stable’s The New Americana (pp 3, Mike Oosting), third in the first Tillie stake and second best in the Violet.

The outside nine post will be manned by Shelby Rae (pp 9, Gary Rath), second best in an Incredible Tillie leg and the surprise winner a week ago in a prep for this stake, beating division leader Rollin Coal. The other first round Incredible Tillie winner Fox Valley Jazzy (Tyler Shehan) has the 10-hole tonight.

Of the 10 second division starters all but two raced in the first Incredible Tillie Leg. On the other hand 8 of tonight’s 10 starters in race one weren’t ready to begin their racing careers on June 16 and missed the opening leg.

So don’t be misled by what appears to be the weaker of the two freshman filly stake series events on the card. In may seem to be that way only because most of the first grouping of fillies got a later start in their careers.

There are two more Incredible Tillie legs after tonight’s second round still to be contested so there’s still a long way to go to determine the finalists on Hawthorne’s Night Of Champions.

The Nick Giberson Stable’s Yank’s Rendezvous (Casey Leonard) is the only first division starter with a pari-mutuel victory on her résumé, and that came a week ago. That win coupled with the one-slot will see her open as the 9-5 first flash favorite.

Expect Better: Rollin Coal’s unbeaten streak was snapped at three by Shelby Rae last week. The Sagebrush filly never fired in the lane and ended up fourth beaten four lengths. The program comment on her past performance reads: “No Excuse” however that may not be entirely accurate.

I asked owner and trainer Hosea Williams about his prize freshman filly’s lack of a strong finish last week (one full second slower than in her winning Violet elimination) and he answered: “She wasn’t at 100 percent in the race. We scoped her afterwards and she had some mucus. We’re treating her and she should be fine for Friday’s stake.” 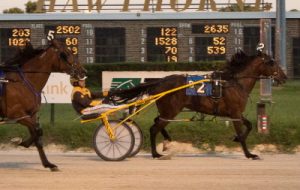 Can Fly Late: Anytime you see an ICF 2-year-old pacing last quarters under 27 seconds that should get your attention. It’s always gets mine. In this case the attention-getter is the state-bred filly The New Americana and you can bet she’s a threat tonight.

The New Americana was stuck behind bad cover in the first Incredible Tillie leg. Once she got clear and rolling the filly sped to 26.2 last quarter when she was third to Fox Valley Jazzy.

In the Violet Final The New Americana was three wide in the last turn some nine lengths behind before motoring home in 26.3 to be second best. The youngster had the seven-slot in that race. Tonight she landed the three.

Back from Hoosier Park for the third race Open mare pace is the Angela Coleman Stable’s OK Heavenly and she’s unbeaten (4-for-4) at the Hawthorne meet in the top level distaff competition. She’ll open as the 2-1 favorite.

Also in from Indiana is the Roger Welch Stables Can’t Touch This, a 1:51.1 Open winner in mid-June at Hoosier Park. The now 4-year-old Indiana bred mare captured the $78,400 American National in 2015 at Balmoral as a two-year-old.

Let’s Drink On It (5-2, Travis Seekman), from the Joe Seekman barn, was assigned the outside eight slot in the sixth race Open Pace and warrants it after a very impressive 1:52.1 victory last week racing without cover from the backside on while pacing a 54 last half..