Bernie and Deb Paul’s Seeyouatthefinish, the likely favorite in Friday night’s $10,000 featured Open distaff pace, has come a long way from being a one-time non-winners of one race $7,000 claimer and her driver Kyle Husted is certainly glad she did.

“When she’s right like she is now she is as good as any mare racing at Hawthorne,” said her 24-year-old driver (pictured).

“After the first time I raced her back in January when she wasn’t herself, I think since then I’ve only got beat with her one time and that was (last month) when I got trapped on the rail with her.”

Kyle’s had his facts right. He’s won 4 of the last five drives with Seeyouatthefinish and that includes a front-end victory in the $17,600 Late Closer Final “Winner’s Over” on May 27.

“That was a big effort from her when she won (the series final) in the slop but I was really impressed with her performance last week,” continued Kyle. “That mile was something special.”

Saddled with the 10-hole a week ago Western Terror mare came up with an remarkable first place finish even though she raced wide from the very first step away from the starting gate.

Husted couldn’t find a hole with Seeyouuatthefinish and had no choice but to keep going with the mare. She was parked out through a 56.2 first half. Still wide through the final turn Seeyoustthefinish did get command at the three-quarters (1:25.3) and instead of tiring she just kept on going.

Fox Valley Charm came charging at Seeyouatthefinish however that mare fell three parts of a length behind the Paul trainee at the end of the 1:53 mile. 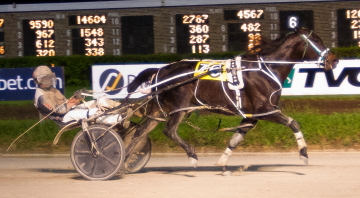 “With the trip she had I thought she would get tired in the lane but she didn’t. She dug in on her own. She put that other mare away and still had something left at the finish. She wasn’t all out by any means.”

Now a 6-year-old, Seeyouatthefinish didn’t earn a check in her first four starts as a 3-year-old when she began racing for the Paul’s. They dropped her in for a $7,000 price tag at Maywood soon after and she responded with a pair of triumphs.

The Western Hanover mare was still racing in non-winners of four to be claimed for $8,000 in November of that year but since then the “No Sale” tag was applied to her and she’s been the main money-maker for the residents of Oregon, Illinois.

Seeyouatthefinish was an eight-time winner in 2014 and banked over $60,000 while often racing in the top level filly and mare paces on the circuit. Last year she put almost another $50,000 on her card and nailed down 11 wins, four of them coming in “Winner’s Over events.”

Seeyouatthefinish lowered her mark with a 1:51.4 win in 2015 at Balmoral Park.

The mare is well on her way to having another banner year this season. She already has $25.230 in purse earnings. Tonight Seeyouatthefinish starts from the eight-slot and has some tough customers to be dealt with, including a trio of ICF 3-year-olds—Char N Marg (Casey Leonard), Lexington Lady (Matt Krueger) and Whiskersonkittens (James Lackey).

OK Heavenly, a 4-year-old daughter of Sportswriter, will be making her first start for Illinois owners Dandy Farms (Glenview) and Mark Winship (Canton). Rob Rittof is the new trainer of OK Heavenly who rattled off winning miles of 1:50.2 and 1:51.3 at Vernon Downs in her last two starts in May.