The second round of Hawthorne’s Late Closer Series will conclude Sunday with five events. You wouldn’t think you would find that one of its combatants is eligible for the prestigious $1 million North America Cup in late June at Woodbine but that’s the case.

He’s the 3-year-old Indiana bred pacer JD’s Chancey Design, trained by Pasko Vucinaj for Michigan owner Luis Vucinaj. Sam Widger returns to his home state to again drive the Shadyshark Hanover gelding, a 1:54.4 winner with Sammy a week ago in the pacer’s first outing since early October of last year.

The horse was nominated to harness racing’s biggest prize in Canada on June 28 and was listed at 40-1 in that stake’s Spring Book. 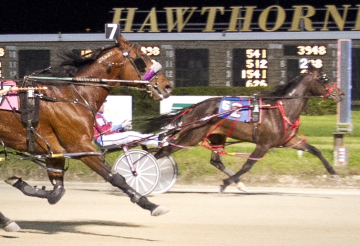 You might think with a gaudy record of 12 victories in 14 starts as a freshman including the $20,000 Indiana Sire County Fair Championships at Indianapolis last summer and a $32,697 first season bankroll, JDs Chancey Design wouldn’t be qualified for the Hawthorne Series but that’s not the situation.

The horse’s first nine triumphs all came in non-wagering races, mostly on the Indiana County Fair Circuit. Only his last two wins in 2015 were in betting contests, both at Lexington. And only $6,700 of his earnings came at The Red Mile.

Hawthorne’s dubious computer-generated morning line listed JDs Chaney Design as the 5-2 second choice behind Dr. Drake Ramoray (Casey Leonard) who was beaten 2  and 1/2 lengths by the North America Cup nominee. I’ve got it the other way around in mind with JDs Chancey Design at 8-5 and Dr. Drake Ramoray at 7-2.

Sunday’s first NW 4 Late Closer looks like a dandy if you go by its first round action. Rocknroll Wildcats nosed out the 1-2 favorite John Jay last week and they tangle again but this time with significant post changes.

Rocknroll Wildcats (Kyle Wilfong) goes from the inside (post 1) to the outside (post 7. Meanwhile John Jay has the four-slot again.

Casey Leonard, who had a five-bagger on Friday night, has more live Series mounts Sunday with the beaten favorite Shotski (race 4), winner of his previous three races in Indiana, in Late Closer No. 2, along with Caffeine Kid, 2-for-2 at the meet in race 5 and the Leonard Stable’s Duneside Sport in race 7, both NW of 2 Late Closer series (No.1) divisions.

Lock of the Night: There are few “sure-things” in horse racing but perhaps one of them is the pacer Ontario Success this year competing at Hawthorne. The Roger Welch trained 6-year-old won for the 6th time in 8 starts on the in-town big track, this time in the $14,000 second leg Late Closer for winners over $1,000 per start this year and last.

The victory was Casey’s third of the night and just like last week’s first leg, the issue with Intario Success wasn’t in doubt.

Leonard took the prohibitive 1 to 9 favorite out of fourth on the backside, raced him first over to the pacesetting Freedomformysoul, and Ontario Success went on to drew off with a 1:51 flat clocking, adding another $7,000 to his season account which now stands over $44,000,all but $3,000 of that amount coming at Hawthorne.

Kolt Power was second best to Ontario Success again, a non-threatening two plus lengths behind. Freedomofmysoul held on for third.

In the first $11,000 division of Late Closer for pacer not earning $1,000 or more per start in 2015-16 Vince Affrunti’s Southwind Scorpion benefited from a heady second over trip from driver Matt Krueger and pulled away to a second straight series win, this one by four-plus lengths in 1:52.3

Not to be out-done, Sunset Dreamer ($4.60) also made it two-for-two in the second split of the same series, again in come-from-behind fashion for driver Kyle Wilfong in 1:53.4. The Bob Rittof trained 5-year-old has won 5 of his e8 season starts at Hawthorne.