Homepage
You are here: Home1 / Mike Paradise2 / She’s A Doozie Blossoming as 3-Year-Old

A pair of Violet stake elimination races for ICF 3-year-old filly pacers are the showcase events on the Friday card. A fifth place or higher finish is needed to advance to next weekend’s championship.

All the major players in last week’s Plum Peachy stake series are back in action tonight with the second (third race) division of the Violet elimination giving us the first sophomore season match-up of the Mike Brink Stable’s A Real Doozie and Freddie Patton Jr.’s Princess Sage.

A Real Doozie (Mike Oosting) dug in the lane in her Plum Peachy victory and wouldn’t be passed, pacing a 1:53.4 lifetime best mile. Princess Sage, usually on the front-end, came out of the pocket and blew past the 4-5 favorite Lady’s Party with a career best clocking of 1:53.2.

A Real Doozie leaves from post five tonight while Princess Sage (Freddie Patton Jr.) has the outside 9-slot and Lady’s Party (Casey Leonard) starts on her left with the eight post. 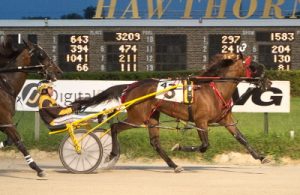 An interesting note is that A Real Doozie didn’t compete in the first leg of the Plum Peachy back on June 2nd instead she raced in a non-winner of two event two days later.

“I just didn’t think she was ready to race the top Illinois-bred fillies in her division yet,  said trainer Mike Brink. I wanted to get her confidence built by racing in non-winners of two until I thought she was good enough to take on some of those better fillies.  I also thought she would only have to win one leg of the stake series to make the final and now she has done that with two more legs to go.”

A Real Doozie had a satisfactory 2-year-old campaign making just under $25,000 for her Arlington Heights, Illinois owner. However she had just one victory.

“She had some lameness issues as a 2-year-old and tailed off at the end of the season continued Brink.  We worked with her over the winter and earlier in the season and got those taken care of.  Last year when I was training her she never liked dirt in her face and wouldn’t want to follow a horse. We put some rigging on her head but that didn’t seem to help. I thought well maybe it’s just a 2-year-old thing and she’ll come back as a 3-year-old smarter and better.  As it turned out A Real Doozie was no different at the start of this season than she was when we quit with her.”

As a freshman a Real Doozie had five different drivers. This year Mike Oosting has been the only one at her lines, Brink said, “I told (Mike) Oosting of her situation and told him if he was going to follow horses with her he had to put her on a man’s helmet, Mike had no problem with the filly because he just put her on the front end but now she seems to be okay racing out of a hole as far as the dirt hitting her in the face. So I think we have that situation behind us.  She raced good Friday night and might be one of the better fillies now in her division. We’ll just have to wait and see how it all plays out.”