Homepage
You are here: Home1 / Mike Paradise2 / Simmons has Plenty of Ammo for Trainer’s Race

As we head into the homestretch of Hawthorne’s winter meeting, the competition for the top trainer honors most likely will go to the final night of racing to determine who takes home that honor.

With the cancellation of both Thursday’s and Friday’s cards due to a heavy snow storm, there are only six nights of live racing left for the winter’s meet and the trainer’s race couldn’t be any tighter.

Going into the weekend we have both trainers Terry Leonard and Loralee Johnson with 13 winning horses from their stables, Tom Simmons only one behind with 12, Payton Ode right in the thick of it with 11 and Nelson Willis close behind him with 9.

Simmons certainly has the numbers going postward into the weekend to make a significant and maybe a lasting impact in the trainer’s race. The veteran Springfield based trainer is planning to ship nine of his horses to compete on the Sunday’s card and they include some of Simmons best from his current stable. 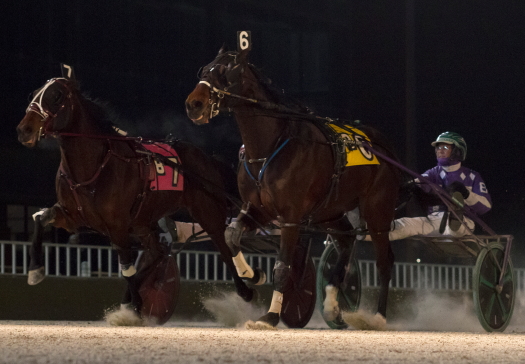 Kelly D, owned by his Stockton, Illinois breeder Larry Breed, romped in his first two starts of the meet in conditioned races. The six-year-old pacer had the misfortune to be locked-in and pushed back in last week’s Open when he came on for the fourth place check.

Ode also has a strong Open Pace contender with Firedrake (Kyle Wilfong), a fast closing second last week by a neck to Fox Valley Nemitz. Firedrake has been third or better in all four Open starts at Hawthorne and proved best on January 19th with a 1:54 flat clocking.

Casey on Top: Heading into the weekend two-time defending Hawthorne champion Casey Leonard continues to hold the top spot in the meeting’s driver race. The 40-year-old Casey has brought home 28 winners, five more than Sam Widger. The Top Five is rounded out with Kyle Wilfong (20), Brandon Bates (19) and Todd Warren with 18.