By Mike Paradise
“If You Build It They Will Come” is an unforgettable line from my favorite baseball movie “Field of Dreams.”
However in this case I’m not suggesting that a baseball diamond gets built in the middle of some corn field in Iowa. Instead I’m referring to a $50,000 pot that has been built up and will be offered next Saturday at Hawthorne’s Night of Champions for older ICF male horses.
If you look at the field of night’s tenth race Robert S. Molaro Memorial stake prep race the opportunity to compete in that $50,000 event has lured back some of the better ICF bred pacers who had been competing elsewhere in the country . . . and their owners wrote a $500 starting fee check to compete in it. 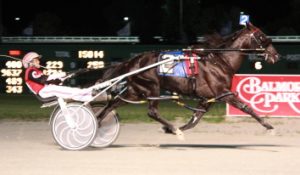 Back from Pennsylvania where he was a frequent winner of Preferred events at The Meadows is the Megan Rogers Stable’s Unlocked who is closing in on a half-million dollars in purse earnings at the age of five. The horse owns a 1:49 flat mark taken on the five-eighths track in eastern Pennsylvania.
Also shipping in was the 6-year-old A Cool Card (1:49, Springfield) who now races out of the barn of Michigander Joe Cirasuola and has $408,847 banked. He came to his home stake from Hoosier Park. So did Cole Heat (1:49.4, Balmoral) the Aged Male Pace stake champion at Du Quoin who makes his first appearance of the year at Hawthorne.
The 8-year-old Big Brad was vanned in from Ohio a couple of weeks ago and pointed for the Molaro stake by his trainer Bob Phillips. 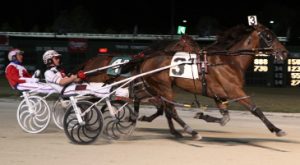 Then there are the familiar names of solid older state-bred pacers who have competed all summer at Hawthorne like Fort Silky with over $800,000 in career earnings and his Terry Leonard stable-mate Mystical Walter ($344,045, the Joel Smith Stable’s Dixie Boy, Dane May’s Dinky Dune, Mike Brink’s Fiveknuckleshuffle and Alex Adam’s Lucky Crusader.
Now that’s the kind of field that used to be the norm on the Chicago circuit when a summer Saturday night came along and in the future it might again if we can ever get the purses built back up where they belong with another Casino/Slots-at the-Tracks bill passed, and this time signed by the Governor and not vetoed as it was by the previous one TWICE.
Four of tonight’s Molaro prep horses are past Super Night champions. A Cool Card won the 2013 Maurello while Mystical Walter (2013), Unlocked (2014) and Dinky Dune (2015) are the past three Pete Langley Memorial stake champions.
There are plenty of ICF stake events on the 12-race card as well. Five of them to be exact and they are for either two or three-year-old pacing colts or geldings and all with $15,000 pots on the line. 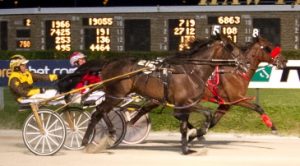 The Name Game: The Maurello for many years was a Super Night stake at Balmoral for aged ICF male pacers. Instead now it’s a Hawthorne Night of Champions stake for aged female pacers. Don’t confuse it with the Molaro, the new name for Illinois top male pacing stake.
Now that the Maurello and the Molaro are “in” at Hawthorne I see an obvious tread under way by track management and I like it. After all, I’m of Italian heritage. I would like to suggest next year Hawthorne eliminates two more names of renowned ICF horses on their Night of Champions stakes card and replace them with “The Mariano” and The “Milano.”
Mariano’s is the place where you can find me every Sunday morning grocery shopping and Milano is often on my “to-get” list because it’s a yummy cookie made by Pepperidge Farm.
You have to admit that the Maurello, the Molaro, the Mariano and the Milano on the same racing card would be unique, and it does have a nice ring to it.
Arrivederci.
http://harnessillinois.com/wp-content/uploads/2021/03/ihha_logo_white_wtext_v2-300x130.png 0 0 Mike Paradise http://harnessillinois.com/wp-content/uploads/2021/03/ihha_logo_white_wtext_v2-300x130.png Mike Paradise2016-09-03 13:33:162016-09-03 13:36:50Simple Math: Big Pots Equal Big Horses