Homepage
You are here: Home1 / Mike Paradise2 / Sisters Tangle on Night of Champions

It was a year ago when the distaff pacers Fox Valley Exploit and Allbeastnobeauty made Illinois history by each winning championships on the same Super Night program.

The then three-year-old Fox Valley Exploit completed her sweep of the Plum Peachy stake series for driver-trainer Kyle Husted on Hawthorne’s 2020 Night of Championships and later that evening her older sister Allbeastnobeauty captured the Tony Maurello Memorial crown for aged mares with conditioner Todd Warren at her lines.

This time around those two siblings will instead go head-to-head with eight other state bred fillies or mares in this year’s $65,000 Tony Maurello Memorial championship.

The family showdown comes about in Saturday’s last race on the 2021 Night of Champions, one of 11 ICF championships to be decided.

Both Fox Valley Exploit and Allbeastnobeauty were sired by Sportsmaster and are the daughters of The Big Dog broodmare She Likes It All, the 2005 winner of Balmoral’s three-year-old Hanover stake back in 2005 for Joe Anderson. 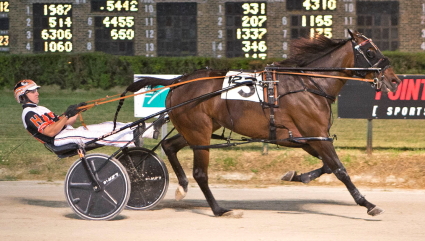 Fox Valley Exploit, owned jointly by Husted and David Brigham of Litchfield, Michigan, won her Maurello elimination last week in 1:53.1 by two and one-half lengths while well in hand to her Altamont, Illinois driver and trainer.

Fox Valley Exploit will go to the post Saturday night with a $259,607 career bankroll in less than three years of racing. The now four-year-old mare has won 20 of 37 lifetime starts and boasts a remarkable 68.1 per cent winning clip when in strictly ICF races.

Allbeastnobeauty also was a comfortable winner in her $15,000 Maurello elimination, pacing her mile in 1:53.1 in front-steeping fashion for Warren.

The Illinois bred older sister was good as a two- and three-year-old but has been even better as an aged pacing mare.

In her freshman campaign Allbeastnobeauty made close to $49,000 when she raced out of the barn of Springfield horseman Mike Brink. Almost $19,000 of that total came with her third-place finish in the Incredible Tillie.

In her second season she hauled in $101,947 while winning both $25,000 State Fair finals at Springfield and Du Quoin. Allbeastnobeauty went into a sale in November of that year and was purchased by the Virgil Morgan stable.

Allbeastnobeauty notched victories in three Ohio Opens in 2020 at the Daytona Raceway, raking in more than $109,000 as a four-year-old. 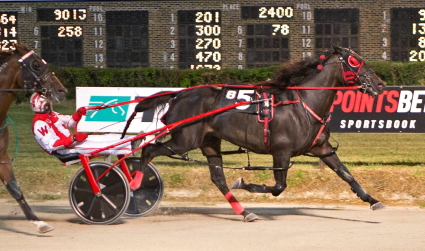 Last year at the age of five she competed the first half of the season in Ohio before joining the Todd Warren stable in May when her racing fortunes really took off.

After a third-place finish in a Hawthorne Open Allbeastnobeauty uncorked a five-race winning streak for her Indiana owners Brookside Stable (Grabill) and Keith Ravis (Leo) that included a pair of Chicago circuit Opens and victories in both her Maurello elimination and its $68,000 final.

The draw certainly went better for the younger sister in Saturday’s showdown.  Fox Valley Exploit landed the three slot while Allbeastnobeauty is on the outside looking in with the 10-hole.

Even though the two sisters will get plenty of play at the betting windows, the Maurello championship is by no means a two-horse race.

As we all know anything can happen once the starting card draws away. That’s why we call it gambling.

Marcus In Town: Former Chicago circuit driving champion Marcus Miller is back in his home state Saturday to handle some horses in Night of Champions events.

The now 32-year-old Olney, Illinois native has driven more than 2,000 horses in a season for eight consecutive years, winning more than 200 times in seven of those campaigns, dipping below 200 only during last year’s Covid shortened racing season.

Marcus will finish this year with more than $3 million in purse money won for the eighth straight year.

Saturday’s matchups between Marcus and Atlee Bender may very well be the first time they’ve competed against each other in a pari-mutuel race as brother-in-laws.