Homepage
You are here: Home1 / Mike Paradise2 / Skeeter Machine on Idle for Now

While most of the top ICF horses we’ve talked about the past few weeks have been in training and are ready to go once the Hawthorne meeting resumes, one Night of Champions titleholder is still taking it easy.

Mt. Sterling, Illinois Trainer Alan Bowen is in no rush for his 2019 Tony Maurello champion mare Skeeter Machine to make her season debut.

“She’s been in the barn for the past five weeks or so. We’re just jogging her for now,” said the 73-year-old Bowen. “I’ll begin to train her in a while so she’ll be ready to come back to the races sometime in late May. I like to have my horses with fresh legs when the hot weather comes along and we race for the better money.

“A horse can only say sharp for so long. If you have them at the top of their game in June they aren’t going to be that way when September cones along.” 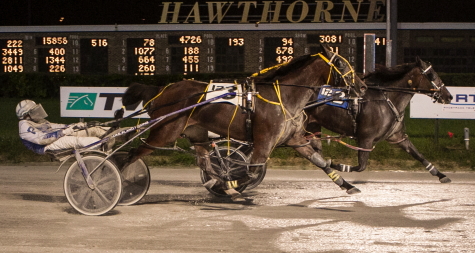 Skeeter Machine (inside with Kyle Husted) held off the late charging Whiskersonkittens (Luke Plano) in the $45,000 Tony Maurello Memorial filly and mare final on the 2019 Night of Champions. (Four Footed Fotos)

Bowen took that belated route with Skeeter Machine last year and it paid off nicely as the mare banked over $55,000 as a four-year-old for Mt. Sterling owners Francis and James Greer. In her 13 starts in Illinois the daughter of had a flashy record of 5 wins, 5 seconds and a pair of thirds in 12 tries, taking her mark of 1:52.4 late last June.

Skeeter Machine wasn’t staked as a freshman and spent all but her last two starts on the Illinois County Fair Circuit. She did make almost $15,000 in her first campaign with almost half of that amount coming with wins in the County Fair Challenge at Du Quoin and in her last race of the year, a freshman conditioned pace at Hawthorne.

“I wanted to see Skeeter Machine prove to me that she was worthy to race in ICF stakes as a three-year-old,” explained Bowen. “When she won at Du Quoin and in her Hawthorne start at the end of her two-year-old season, she showed us she was, so we spent the money on her.

“Skeeter Machine did well as a three-year-old. She won her first leg of the Plum Peachy, was second and third in the next two legs and finished third in the final.

“She had quite a year as a four-year-old, making over $55,000 and winning on the Night of Champions. That was a sweet win for a small horseman like me.

“After her first two starts last year I went back home to Mt. Sterling and left Skeeter Machine with Nicole Agosti and the young lady did a great job with her. The mare was first or second in just about every start at Hawthorne or Springfield.”

Skeeter Machine was acquired as part of a package deal for her Mt, Sterling connections.

“We bought her mare (Kurahaupo Diamond) with Skeeter Machine standing alongside of her and Caroline GR inside of her. It turned out to be quite a buy for us.”

“We have another Illinois bred that we’ll be racing at Hawthorne. That’s Western Perch. We were happy the way he raced as a two-year-old. He made $25,000 last year and the horse had a lot of tough trips in his first season. Hopefully he’ll get some better ones this time around.”

Meanwhile stable-mate Skeeter Machine is enjoying some R & R in Mt. Sterling before she gets ready to defend her Tony Maurello Memorial filly and mare title.

For additional information go to Hawthorneracecourse.com.