“Spreading the Wealth” was the appropriate phrase for Wednesday’s final racing program of this year’s Du Quoin State Fair harness meet and for that matter also the correct axiom for both days of racing.

Of the 12 winners on the second day of the pari-mutuel program, 9 different trainers had a horse make a stop in Du Quoin’s Victory Lane.

The meet’s leading trainer was Mike Brink with six.  Roshun Trigg had a trio of winners from his barn.   Seventeen trainers had a single winner among the 26 races (including three non-wagering events) at the Du Quoin meet. 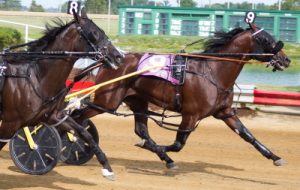 The leading driver for Du Quoin wasn’t settled until the 12th and last race on Wednesday when Mike Oosting brought home Fox Valley Herbie to his 1:51.2 victory in the $29,000 Dudley Hanover for ICF 3-year-old pacing colts and geldings.

The Tom Simmons trained colt overtook the speed in mid-stretch and then held off a late-charging Slzburgerslzburger (Juan Franco), for his third season victory for Springfield owner Benita Simmons.

Earlier on the card Vic’s Pizza grabbed another slice of glory in the 2-year-old ICF trot male division, when he followed his Springfield championship with a gutsy victory in the $33,000 Darn Safe stake.

Given a heady drive by Oosting for trainer Mike Brink, Vic’s Pizza was pulled out of the pocket in the early going after a 30.1 first quarter and got away with a slow 32.2 second quarter, bunching up the field. Jared Finn then pulled Cruzen Cassi and he powered his way to an eye-to-eye battle through the third quarter with the 3 to 5 favorite.

It wasn’t until the deep stretch that Vic’s Pizza ($3.40) put Cruzen Cassi away and nail down his fourth, first season win, in seven tries for the Illinois trio of owners: Mark Brown (Chatham), Josh Carter (Williamsville) and trainer Brink, this one in 1:59.1.

Hart To Heart ($7.20) picked the right time to grab the first win of his career for Illinois owners Donna Crebs (Cantrall) and Judy Conzo (Lincoln). The Mike Brink trained freshman came on with a rush (26.3 last quarter), in the stretch for driver Bobby Smolin to notch the first $16,500 division of the Governor’s Cup stake for ICF 2-year-old pacing colts and geldings.

The second $16,500 Governor’s Cup split also went to a first-time winner when Al’s Briefs ($6.80) came up with a strong 1:54 flat triumph with driver Kyle Wilfong for trainer Clark Fairley.

Wilfong took Al’s Briefs out of third on the backside and on to the front for the first time in his young career. The freshman then dug in and repelled a late bid by the second place finisher Backstreet Lawyer.

Fox Valley Charm was sent off as the overwhelming 1 to 9 favorite in the $8,000 ICF Aged Mare Pace showdown, but her victory was anything but easy for the Rodney Freese trained 5-year-old mare.

Oosting quickly put Fox Valley Charm on top and after a 28.3 first quarter backed things down. She led at the half over the pocket horse Mimosa Party after a slow 31.4 second panel. Wilfong then took Bucklegirl Bobbette out of third, raced alongside the favorite in the last turn and actually had the lead turning for home.

However, Fox Valley Charm then fought back to win it in 1:54.4 for owner Peter Karras of Sherman, Illinois when she unleashed a blistering 25.3 final panel.

The $8,000 Aged Colt and Gelding Pace saw a spirited three-horse stretch drive with Dane May’s Dinky Dune proving best for driver Wilfong in 1:52 flat. The pacesetter Cole Heat who cut fractions of 27.3, 56.3 and 1:24.3 had a big effort for second, beaten by a neck, while the 3-2 favorite Caffeine Kid was right there for third.

Dinky Dune had to race first up, but still got the job done for his trainer and by owner Dane May of Newton, Illinois.

The Wednesday card got under way with a $6,500 Topline Stake for 2-year-old pacers and it was a one-two finish for the Brink Stable as the Ed Teefey owned filly Spunky Bottom Girl ($4.60), driven by Brink, edged out stable-mate Wrigleyville in the 1:59.4 mile.

There were five consecutive $7,500 County Fair Challenge events, with the 2-year-old filly trot going to Shady Maple Valley ($8.20), driven by his owner and trainer 82-year-old Ray Gash of Du Quoin, in front-end fashion trotted in 2:02 flat.

Wilfong moved the 6-5 favorite Skeeter Machine ($4.40), on the backside to the lead and the Alan Bowen trained filly went on from there to take the 2-year-old filly pace by in 1:55.3, knocking over nine seconds off her previous best time for owners Francis Greer (Mt. Sterling) and James Greer (Peoria).

The 3-5 public’s choice Who Deen E (Oosting), rallied in the lane to nudge True Colors (Mike Rogers), by a nose for the top spot in the 2-year-old colt and gelding pace County Fair Challenge, in 1:56.1. Mark Walker trains the Sportsmaster gelding for his parents Tom and Karen Sue Walker of Carrollton, Illinois.

The 3-year-old colt and gelding pace $7,500 Challenge saw Smooth N Creamy ($7.40) wear down the speed and draw off to a 1:56.3 driver Cornelius Cavett. The Ideal Towne winning colt is owned and trained by Freddie Patton Sr.

The last of Wednesday’s County Fair Challenges Little Ms Aryss ($11.40), driven by her owner and breeder Henry Brown of Ackerman, Mississippi, zipped past in the lane, going by the heavy 1-5 favorite Lou’s Game N Match to win the 3-year-old filly trot in 1:57.4. The Southwind Breeze winning filly is trained by Dossie Minor.