Homepage
You are here: Home1 / Mike Paradise2 / So Far, So Really Good for “Ozzy”

Saturday night’s second leg of the Incredible Finale freshman pacing stake takes us to the half-way point of the Night of Champions series for ICF juvenile pacers.

There’s still a lot of time left before Hawthorne’s gala evening of its meet, it’s annual Night of Champions, nonetheless already some of the two-year-old state bred colts and geldings have showed they have the talent to be major contenders when the $85,000 (est) championship does roll around on Saturday, September 25th.

One of those two-year-old’s is the good-looking Gary Rath trained youngster Fox Valley Ozzy, a son of World Off Rocknroll out of the Sportsmaster broodmare Fox Valley Lynn. 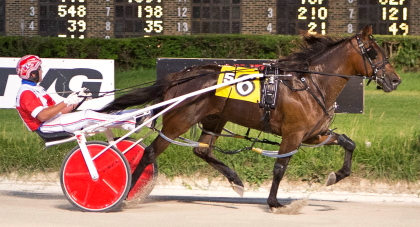 Fox Valley Ozzy (Casey Leonard) followed an easy two-plus length victory (1:56.2) in last month’s first round of the Incredible Finale with an even more impressive triumph in a $45,000 Cardinal division, drawing off by eight lengths with Casey, this time in 1:55 flat.

His Marengo, Illinois owners Steve MacKin and Dave Samuleson paid $14,500 for “Ozzy” at last year’s Illini Classic Sale and in his first two career starts the youngster has already earned $31,250,

And off what we have seen thus far from new pride of the Rath stable, you certainly have to like the chances of the youngster padding his first year’s bankroll rather substantially.

Rath and his two fellow Marengo, Illinois friends went to the 2020 Illini sale with a few hip numbers of horses written down that they would like to purchase “and Fox Valley Ozzie was one of them.”

“I liked everything about the horse,” said Gary. “The bloodlines, his looks, and just the way he was put together. Of course, we are extremely happy the way his career has started off. We’re just hoping he can stay healthy and keep it going.”

As far as Fox Valley Ozzy’s demeanor, “it couldn’t be any better.” continued the Wisconsin native, “The horse is like a puppy dog to be around.”

Rath felt there is a good crop of state-bred freshmen this year. “An example is (Kyle) Husted’s pacer Get E Up. He also looks like a good horse.” 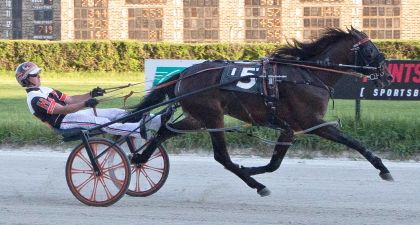 Get E Up (Kyle Husted) hopes to follow his recent Cardinal triumph with another win in tonight’s sixth race division of the Incredible Finale Night of Champions stake series. (Four Footed Fotos)

Since I talked to Gary before Saturday’s Incredible Finale draw, it’s ironic that not only did Get E Up land in the same division as Fox Valley Ozzy tonight, but they’ll start side-by-side with the inside one and two posts, in that order.

Get E Up, driven by his trainer Kyle Husted), was significantly the best in his Cardinal division, almost four lengths ahead at the end of a 1:54.3 mile.

Saturday’s first division of the Incredible Finale will jump start a 12-race program. It looks like an competitive event and every one of its nine starters are seeking their initial pari-mutuel win.

Rollnroz ($10.80) breezed on the front-end with Buford, leading at every pole for trainer Roshun Trigg and Mississippi owners Eric and Rosalind Jaynes. The Fort Knox filly got away with soft fractions of 29 flat, 31 flat and :29.2 and then uncorked a quick 26.3 last panel.

Wilfong gave Apple Valley ($2.6) a ground-saving inside journey, racing second or third throughout, but when the stretch drive came the Jay Garrels trained filly left her rivals in the dust, pulling away to a first season best 1:55.2 mile.