It seems that every racing season there’s at least one ICF pace or trotting division that can be labeled as the topsy-turvy group. This time around it’s definitely the troupe of state-bred 3-year-old filly pacers.

The first two legs of the Plum Peachy stake series have been won by four different state-bred sophomores: Filly Forty and Fancy Creek Jolene in round one, and then Princess Sage and A Real Doozie in the second legs.

Last week’s Violet eliminations didn’t make the 3-year-old filly pace division any clearer. In fact, it probably clouded it up even more as we head into Friday night’s $27,200 Violet Championship.

The Terry Leonard Stable’s Lady’s Party was only a nose better than A Real Doozie in her Violet elim and it was that division’s fourth place finisher Princess Sage who powered past Lady’s Party a week earlier when the Freddie Patton Jr. trainee cruised in leg two of the Plum Peachy Series. 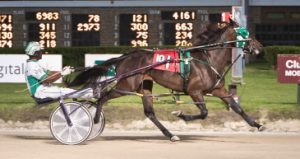 Filly Forty (Jamaica Patton), a winner of her Violet elimination, is one of the favorites for tonight’s championship. (Four Footed Photo)

The Donna Holt Stable’s Filly Forty was second best to A Real Doozie in the Plum Peachy but she wasn’t second best to any filly last Friday with het 1:56.4 Violet elimination victory.

Meanwhile first round Plum Peachy winner Fancy Creek Jolene, who broke stride in the second series leg, rebounded last weekend with a huge close and paced the last panel in a speedy 26 flat to be second.

Fancy Creek Jolene (Matt Avenatti) has the seven but that’s not a bad thing for her come-from-behind style of racing. The nine-slot hurt Princess Sage (Freddie Patton Jr.) last week when she was fourth in her elimination and she’ll have to start from the same spot tonight.

As we all know upsets do happen and looking to pull off a surprise in the Violet are Hope Hotspur (Juan Franco), Boogie On Down (Kyle Wilfong), Razzleme Dazzleme (Kyle Husted), Dandy’s Dududidudu (Ridge Warren) and My Kind Of Dance (Tyler Shehan) who will have to buck the outside 10-hole.

$500,000 Pot on the Line: Hawthorne’s Jackpot Hi-5 wager has gone without a sole winning ticket for the first 38 nights of the meet and the racetrack has joined forces with the USTA’s Wagering Incentive to guarantee a $500,000 pool on Saturday’s 20 cent popular wager.

Of course correctly picking the first five wagers on Saturday’s tenth race, a 12-horse field is extremely challenging, but who knows if a shot at a half a million bucks for a 20 cent bet on an Illinois harness race will ever be available again.

The Jackpot Hi-5 Pool has sprouted to $224,190 through 38 nights of wagering without a winner and with likely massive totals of money coming in from all over North America for a shot at a half-million dollars, I expect Saturday’s pool will exceed $500,000.

Road Weary: The most traveled Hawthorne driver this week has to be Jamaica Patton. The 36-year-old Mississippi native has spent a good portion of his days (and nights) on the road.

The Springfield based horseman drove to the Fairfield County Fair on Monday, a three hour trip, to drive nine horses for trainer Roshun Trigg and won with three of them.

Then it was a journey back to Springfield after those fair races, another 200 mile one-way excursion. Jamaica then took to the road Wednesday and went from Springfield to the Henry County Fair, another two-plus hours on the highway, and drove three more winning horses for Trigg.

It was another 110 miles return to Springfield after those fair races and then another three hour drive the next afternoon to Hawthorne for Thursday’s card.