The first ICF stake for two-year-olds isn’t until the latter part of June so it’s going to be a while before we get a look at the 2020 crop of state-bred freshmen pacers and trotters.

However, I did come across the Illinois Department of Agriculture’s list of its Springfield and Du Quoin’s two-year-old stake eligible horses and also those of the its Violet and Cardinal juvenile stake nominees, so I thought it might be interesting to take a sneak-peak at its inventory.

What stands out is the number of ICF freshman stake eligible pacers or should I say the lack the nominations for late July Violet and Cardinal events and the State Fair championships that will follow later on.

Only 14 colt or gelding pacers are eligible for those mid-summer events and just 15 state-bred pacing fillies. The nomination list for the first season trotters is much, much better with 28, twice as many as the juvenile pacers who are entitled to compete in Illinois stakes. The ICF filly trotting eligible roster stands at a respectable number of 20.

At this time just what horses will be on the racetrack when the ICF two-year-old stakes roll around would strictly be a guessing game but some research did secure enough information to whet the appetite of your author and accordingly I’ll gladly pass it along.

Among the freshmen eligible male pacers is Ashlee’s Fine Guy, an Ashlee’s Big Buy colt who sold for $36,000 at last year’s Illini Classic Yearling Sale and there’s Frontier Charley, a son of Sagebrush, was brought a price of $24,000. His dam Cuzurinittowinit’s first foal, by Cams Fortune, had a mark of 1:49.3 and made almost $700,000. 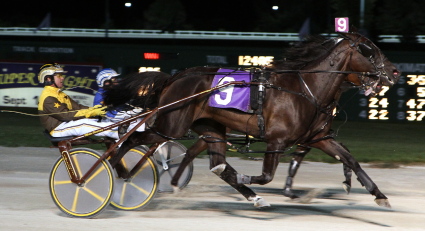 Ideal Big Guy, another Ashlee’s Big Guy colt went for $19,000. Partyatmossasplace, a son of Party At Artsplace is the brother of Minosa’s Party (1:5.2, $152.952). Well Basically, a son of Sagebrush, was a $31,000 purchase and is currently one of the six dozen or so two-year-olds under trainer Erv Miller’s care at the Southern Oaks Training Center in central Florida.

As far as the ICF stake eligible two-year-old pacing gals are concerned there’s Dandy’s Duchess, a daughter of Sportsmaster who sold for $40,000 as a yearling and Ashlee Chanel, an Ashlee’s Big Guy filly who fetched $31,000.

Some other juveniles to keep an eye on is the Flacco Family Farms home bred Ryansmajesticrose, a daughter of Ran N Hanover, out of the broodmare Caribe Royale. That makes her a half-sister to the notable Illinois bred pacers Royal Rose (1:50) and Royale Big Guy (1:51.4).

Others are the Major Bombay gal Harts Heart, a half-sister of Hart To Heart (1:52) and Movie Sage, a $10,000 buy. She’s a daughter of Sagebrush from the long-time Artsplace broodmare Movie Legend who last decade produced several six-figure purse earnings pacers that raced out east.

We’ll examine the 2020 crop of ICF juvenile trotters eligible to the Illinois Department of Agriculture sponsored stakes in our Sunday story.