The inaugural 2018 legs of Hawthorne’s Night of Champions stake series moves over to the 3-year-old trotting divisions Sunday night with a pair of Beulah Dygert Memorial events for fillies early on the card and a single Erwin Dygert Memorial trot for colts and geldings later on the program.

The last time we saw the Designer Lady home-bred in action was in the $130,000 Fox Valley Flan Final when she drew off to a 1:58 flat mile, a new track record for a freshman filly trotter.

Trainer Brett Wilfong’s 26-year-old son Kyle is back in the bike behind the winner of $94,187 in her initial campaign. While the filly drew very well with the one-slot she hasn’t been postward since last September. She did have a third place finish (2:00.3) qualifying at Hawthorne 10 days ago.

One of the pre-stake favorites is Lou Silver Star (Tyler Shehan) from the barn of trainer Roshun Trigg. The filly comes out of the Bea Farber where she took on “the boys” and did win a leg of the series in 1:58.

Also likely to get a lot of play is the Steve Searle’s Trotting Grace, a winner two weeks ago. It was he filly’s first start on Lasix. She leaves tonight from post 5 in the 6-horse field. 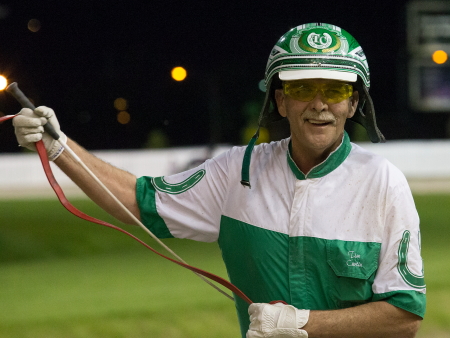 Sunny Sasha (Jared Finn), the 20-1 upset winner in last week’s Daryl Busse final, drew well with the two-slot, just inside of New Queen (Casey Leonard) who spent April at Pocono Downs competing in the tough Weiss series and now races out of the barn of trainer Kim Roth. Shadow Copy (Todd Warren) came in from Florida for the ICF stake series and landed the outside post.

The fourth race second Beulah Dygert split appears to be a two-horse race, at least on paper with the heavy favorites White Pants Fever (6-5, Mike Oosting) and Maui Mama (1-1, Casey Leonard) leaving from posts 1 and 2, in that order.

White Pants Fever is 3 for 4 in his second season and he captured last week’s Bear Farber Final by almost three lengths in a career best time of 1:56 flat with his trainer Steve Searle. Mike Oosting is reunited with the son of Lou’s Legacy tonight after driving the youngster much of last year.

The Mike Brink Stable’s Maui Mama had a splendid freshman season winning 7 of 9 races, including both the Springfield and Du Quoin State Fair championships for Morton, Illinois owner Bill Wright. The filly put over $80,000 on her card as a 2-year-old.

While the trio figures to get a good portion of the betting public’s money tonight, at this time of the racing season they aren’t yet in peak form.

The Mike Brink Stable’s Illinimight (pp 5, Mike Brick) followed a non-threatening fourth place finish in his season with a big effort two weeks ago when he got out and rolling a little too late.

Cruzin Cassi (Jared Finn) took on older horses in his last start for trainer Heather Stell when he as hurt by a first over trip. Cruzen Cassi didn’t particularly draw well tonight with the eight-slot in the nine-horse field. He could duck tonight and hope to flush out live cover but he did show good gate speed a week earlier in a 1:57.4 victory.

True Detective, driven tonight by his trainer Curt Grmmel, started out his 2-year-old campaign with a number of victories (five), including two legs of Hawthorne’s Kadabra and the Cardinal title. Staying in stride at times was his biggest problem as a freshman and thus far as a 3-year-old has plagued him, making breaks in all three Farber series legs. 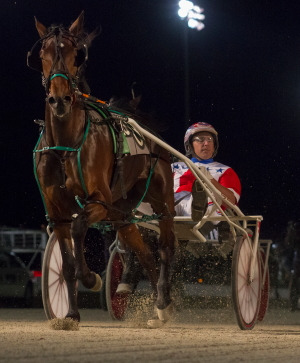 The Hosea Williams Stable’s Rollin Coal came out ready for her 3-year-old debut with a front-stepping victory in Saturday’s second Plum Peachy stake series division with Casey Leonard who had five more winners on the card. (Four Footed Fotos)

Beauty of a Win: Allbeastnobeauty (Tim Curtin) showed last night she’ll be a force to be reckon with in the ICF 3-year-old filly pace division. The Mike Brink trained filly mowed down last year’s division champion Fox Valley Jazzy (Ridge Warren) in the lane and came away with a strong 1:53.3 victory in the first Plum Peachy stake series division.

Both the 7-5 second choice Allbeastnobeauty, the even-money favorite Fox Valley Jazzy and JB’s Shooting Star sprinted out from the starting gate with Fox Valley Jazzy getting command and Curtin content to take the pocket behind the public’s choice who paced a modest 58 flat first half.

Fox Valley Jazzy picked up the pace in the third quarter when JB’s Shooting Star came out of third after her. Meanwhile Curtin waited for a path to open in the lane and once it did Allbeastnobeauty worn down the betting favorite for her second consecutive win for owners Josh Carter (Williamsville, IL), Mark Brown (Chatham, IL), Larry Crawford Port St Joe, FL) and conditioner Brink (Springfield, IL).

Rollin to a Victory: Despite going seven months in between starts the Hosea Williams stable’s 3-year-old filly Rollin Coal ($4.40) rolled to a 1:54.2 victory in the second Plum Peachy opening round division.

Nicely rated by Casey Leonard, who had five more winners Saturday night, Rollin Coal was sent out from the eight-slot, took command before the first quarter pole (29flat) and was backed down to a slow 30.3 second quarter.

With The New Americana (Matt Krueger) on her back at the 59.4 half, Rollin Coal stepped it up a bit (28 flat) through the third quarter and then uncorked a speedy 26.2 final panel to prevail by almost two lengths. The 55-1 longshot Frontier Ginger (Richard S Finn) was third.

The $16,000 Cicero Claiming Series Finals went to JK Hall (Casey Leonard) in the male division and Velocity Layla (Kyle Husted) in the filly and mare category.