With week one of the Hawthorne meet in the history books, the second weekend will focus on the opening legs of seven different Late Closer events.

There will go on Friday’s card. Just one, $9,500 the Bob Larry for pacing colts and geldings that are non-winners of $30,000 (ICF $45,000) lifetime through March 31, is on tap Saturday while trio of Late Closers will be sprinkled throughout the Sunday program. 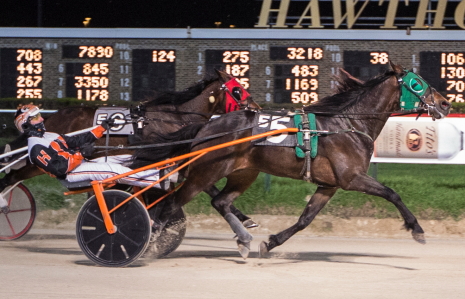 Fox Valley Minka breezed in 1:57.2 on the front end bowing for the Terry Leonard Stable and will open at even-money from the pole position while Ohio invader Roberts New Life, trained by Jim Horvath, who powered past in the stretch in his 1:58.4 triumph has the eight-slot and is programmed at 4-1.

The eighth race Walter Paisley Series carries a $9,500 purse and the series for distaffers without $30,000 lifetime on the card (ICF $4,500) lured a bulky 11-horse field with last Saturday’s winner Dreams And Schemes (Casey Leonard) drawing the second tier slot and the 2-1 first flash favoritism.

Sunday’s first round series legs are all for 3 or 4-year-old pacers and each will carry a $9,000 purse.

Leg one of the Mike Paradise is strictly for ICF male pacers without $10,000 on their card through the last day of March. The Tony Salvaro is the same condition for open company filly pacers while the Phil Georgeff is for colt and gelding open pacers with the identical past performance stipulations.