With back-to-back Fox Valley Flan Night of Champion titleholders in the barn of trainer Steve Searle the subject of comparing the 2019 Illinois Trotter of the Year Louzotic and last season’s two-year-old filly champion Lous Abagail certainly will come up.

The now four-year-old Louzotic has put up some gaudy numbers in a little more than two seasons of racing that includes a pair of NOC titles, 20 wins in 29 career starts, and $243,409 already banked for her Alexis, Illinois owners Flacco Family Farms.

With just one season of racing under her belt it’s not fair to compare Lous Abagail’s accomplishments, at least not yet, to her more seasoned and renowned stable-mate. But how do Searle’s two talented fillies compare physically, personality-wise, and their attention to racing?

Steve was happy to oblige. 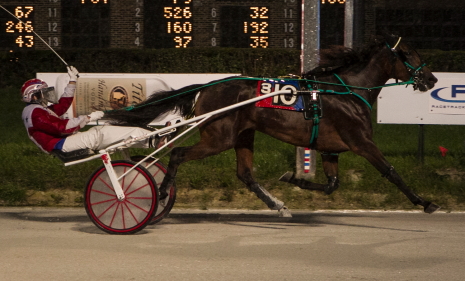 Lous Abagail (Casey Leonard) made it back-to-back Fox Valley Flan championships for trainer Steve Searle when the filly was victorious on the 2019 Night of Champions. (Four Footed Fotos)

“Lous Abigail is taller and longer,” said Searle. “They’re both focused when they’re racing. Gait-wise both are very good. They don’t hit their knees or shins. Louzotic knew what she was doing almost from day one. It took Lous Abigail a lot longer to get it.

“Last January Lous Abigail was trotting a mile in about five minutes. She had no clue. With her breeding I was expecting her to be further along than she was at that time. Then suddenly one day, the light went on. She got it and kept getting better and better and she turned herself into a very good two-year-old trotting filly.”

Lous Abagail is a daughter of Lou’s Legacy out of the Flacco Family Farms broodmare SH Four, making her a full sister to Loucipher, the 2016 NOC Kadabra champion and a winner of over $235,000 in his first two seasons racing for trainer Roshun Trigg

“As far as personalities, the two horses couldn’t be much more different,” continued the Grant Park, Illinois based horseman.

“Louzotic loves to be around people. She wants attention and loves to be petted. Her head is always out of the stall with her ears pointed up. She’s a playful mare.

“Not so with Abigail and that’s why we call her “Crabby Abby.” She keeps to herself in her stall and doesn’t want to be bothered until its race-time. Then she’s all business.”

“Crabby Abby” had a sensational freshman campaign, finishing first or second in all of her 10 outings, chalking up victories in seven of them.

Lous Abagail captured the Violet at Hawthorne in late June and the Shawnee at Du Quoin at the end of August. In between the young filly showed she can handle small ovals as well.

On July 28 the filly won a division of the Downstate Classic on the half-mile fair track at Lincoln. Six days later she proved best in a $12,552 Illinois Stallion Stake at the Mt. Sterling County Fair. Both fair wins came with Kyle Husted at her lines.

“Lous Abagail is one of is one of seven horses, all three-year-olds, that I have ready to qualify in mid-April,” added Searle.

Let’s hope that Steve won’t have to wait much longer to do so.

Phil Langley Passes Away Dept. Of Agriculture Stakes Due April 15
Scroll to top