The Hawthorne spotlight switches over to Illinois conceived and foaled 2-year-old colts and geldings of both gaits Saturday evening with third round action of the Night of Champions stakes series.

In some cases a starting berth in a freshman championship two weeks from tonight is already wrapped-up but for most of the 2-year-olds going to the gate tonight even a purse check could be the difference between racing for a $75,000 to $100,00o pot in a stake final or for $15,000 in a series consolation.

Saturday night’s third through sixth races are $15,000 series divisions of the Incredible Finale for freshman pacers or the Kadabra for juvenile state-bred trotters. 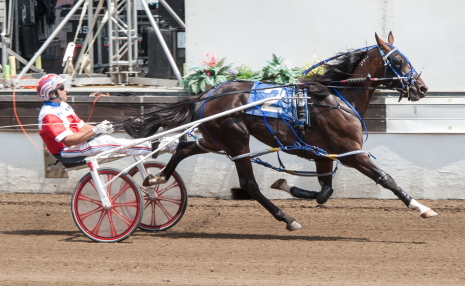 The Bucket (Casey Leonard) and Meyer On Fire (Mike Oosting) sit atop the current Incredible Finale point standings with 62 each and they’ll race tonight in different divisions as prohibitive favorites. They’re both 4 to 5 in the morning line

The Bucket, winner of 6 of his first 8 starts for trainer Terry Leonard, has the outside eight-slot in the third race third division. Inside of him are Fox Valley Minime (1 point), Ryan Racketeer (26), Sports Drama (1), Riley The Mooss (13), Viola (50), Sporty McGrew (8) and Fox Valley Julius (13).

The red hot Meyer On Fire breezed in both 2-year-old colt championships at Springfield and Du Quoin leaves from the two-slot for trainer Erv Miller. Frontier Willie has the pole position while posts 3 through 8 will be manned by Master Sage (0), Cooter Luke (13), Frontier Muffler (58), Coming Up (26), Sports Boy (0) and Maximus (55).

Fox Valley Picaso (pp 8, won his first two Kadabra legs in comfortable fashion despite making an early break in his July 22 victory. The Herman Wheeler trainee also went off stride in his Springfield elimination and was a vet scratch out of that stake’s Consolation because of an injury. 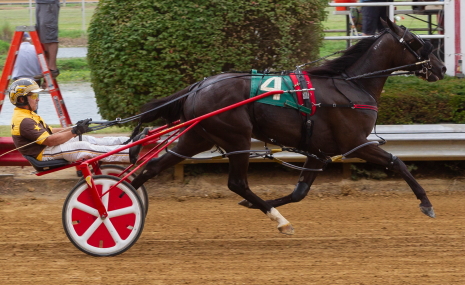 Louscardamon (50 points) is getting good at the right time however he has had his own anguishes trying to stay on the trot. The youngster breezed in his lone Kadabra series start and then went off stride in his Springfield elimination. He rebounded to draw off in that State Fair consolation and then starting running son after the start of Du Quoin’s Darn Safe. Nevertheless he got back on stride and won in 1:59.2 for trainer Steve Searle.

Another strong challenger in race six is Big Garcia Vega (Kyle Wilfong) from the barn of Roshun Trigg. The first season trotter was third in both State Fair championships and in between those starts cruised to a 2:00 victory at Hawthorne, The freshman has 25 series points.

The fourth race first Kadabra split is headed up by the Jared Finn Stable’s Trixie’s Turbo (pp 7, John D Finn), second in the point standings with 62 gathered from a first leg victory and a third place finish in round two

Springfield champion Encantado (Casey Leonard) looked to be home free in the ninth race second Fox Valley Flan leg but the 2 to 5 betting favorite went off stride in mid-stretch, ending up fifth (placed sixth) and enabling Louzotic ($6.40) to capture her fifth win in nine career starts for trainer Steve Searle.