Normally my column on the eve of Hawthorne’s Night of Champions would read about “the long wait is over” and “the most anticipated” evening of the Illinois racing season is here.

But we all know this isn’t a normal year.

The most anticipated night of Hawthorne’s season came on June 1st when the governor gave us the go ahead to restart the meeting after a three-month hiatus of harness racing in our state brought about by the ravaging Covid-19 virus.

So this time around let’s call Saturday’s welcomed Night of Champions the second most eagerly awaited harness racing evening of the year in our state. And with about a third of our season kayoed by the seemingly never ending epidemic, this year it came upon us way too fast. 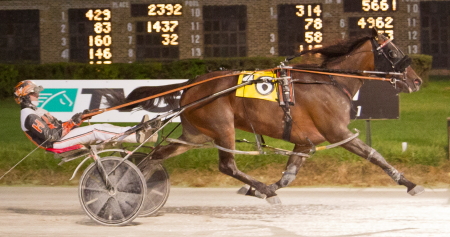 It’s hard to believe that our Illinois harness season ends this Sunday night and it’ll be eight long months before the state’s next season starts up again.

Option Please: Some Illinois owners and trainers of horses that were awarded “byes” in their respective eliminations of the Tony Maurello (mares) and the Robert Molaro (horses and geldings) stake events were surprised to learn they didn’t have the option to race for those $15,000 elim pots and risk not making the series finals.

It seems the Maurello and Molaro stake nomination conditions make it “mandatory” to take “byes” into the finals. The only things that should be mandatory now days is death and taxes, and not in that order

While “byes” are usually considered a “good thing” there can be occasions when an owner and his or her trainer want their horse to compete in the elimination or likely skip a week of racing. Certainly it’s a risk to do so but it’s a gamble the “bye horse” connections should make, not the race track.

For years at Balmoral Park it was always an option given to the trainer of the horse(s) with the most season money earned in a elimination field with 11 to 13 entries to decide to take the “bye” or not.

Heck, I remember one year the Balmoral Race Office had to go down to the fourth or fifth of that stakes season’s leading money earning to finally get its ”bye horses.”

Balmoral had it right. Hopefully Hawthorne will too when the Night of Champions nomination forms come around next year. 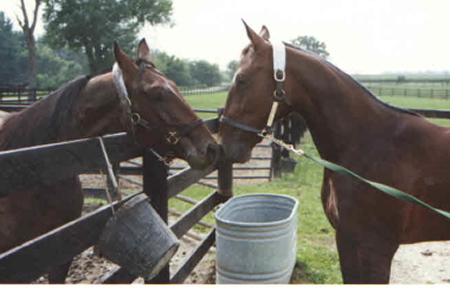 Older brother Buck And Wing (left) and his two-year-old sister Plum Peachy both came away with championships on Super Night 1990 at Sportsman’s Park before a crowd of 15,499. (Pete Luongo Photo)

Sister Sister? Can ICF sisters both come away with victories on tomorrow’s Night of Champions program?

Both the five-year-old mare Allbeastnobeauty (Todd Warren) and the three-year-old filly Fox Valley Exploit (Kyle Husted) will be get plenty of actions in their respective Night of Champion events, the Tony Maurello Final for the Todd Warren trained older sibling and the Plum Peachy final for Husted’s talented sophomore.

Both horses were sired by Sportsmaster and are foals of the broodmare She Likes It All. If each is successful it’ll be the first time full sisters came away with championships on a Illinois Super Night type card.

However, it won’t be the first time for two siblings. We had a sister and brother do it back in 1990 for trainer Mark Fransen and driver Walter Paisley.

It was the two-year-old filly Plum Peachy who captured that year’s $305,843 Orange and Blue Filly Pace and later her older four-year-old brother Buck And Wing won the $50,000 Dan Patch stake.
While Saturday’s Night of Champions will be without any fans at Hawthorne, there was a crowd of 15,499 at Sportsman’s Park on Super Night 1990 and the on-track handle was $2,333,038 on a nine-race card.

And no, neither of the above figures are a typo.