He’zzz A Wise Sky didn’t just reclaim the crown last night as the top aged pacer at the Hawthorne meet, the four-year-old ICF pacer took it back with an abundance of conviction.

The John Filomeno trained pacer demolished his five Open pace rivals with a sizzling 1:49.1 mile, finishing more than five lengths ahead of the two-time Illinois Harness Horse of the Year Fox Valley Gemini (Casey Leonard), an honor that He’zzz A Wise Sky won in 2020 at the age of three. 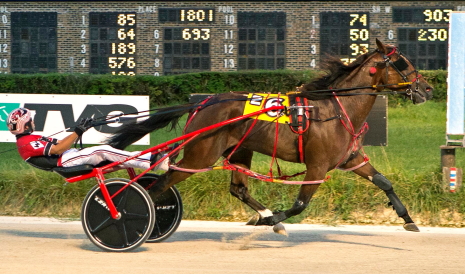 Regular driver Kyle Wilfong, as expected, hurried He’zzz A Wise Sky away from his designated six slot, and as anticipated, Ridge Warren sent Bobcat Bay out from the five and Kyle Husted did the same with Lying In Cash from post three.

Bobcat Bay had command at the quarter mile pole but at the cost of a scorching 26.3 first quarter. Lying In Cash was right behind, but not for long, as Wilfong settled He’zzz A Wise Sky into third as Casey dropped “Gemini” into fourth.

On the backside Husted quickly took Lying In Cash out of the pocket and to the front while Wilfong, for the time being, kept He’zzz A Wise Sky in third. Heading to the half Wilfong pulled the 4-5 favorite out and went after the leaders.

It took a sub 27 quarter by He’zzz A Wise Sky ($3.60) to make the top at a quick 53.2 half. Fox Valley Gemini then started to make his bid in the final turn however He’zzz A Wise Sky still had a ton of pace left, pulling away for his seventh win on the season for Justice, Illinois owner Triple ZZZ Stable.

Primo Giovani was a distant third, beaten 10-plus lengths, in the second race Friday headliner.

It was sweet revenge for He’zzz A Wise Sky and his connections. After his victory in the July 6th Hawthorne Open, the pride of his breeders, Donald and Joann Filomeno, He’zz A Wise Sky was a tiring third to Lying In Cash in the July 30th Open and third best to Bobcat Bay in the August 8th feature.

A trip to Hoosier Park a week ago saw He’zzz A Wise Sky turn things around in a big way as he popped at 14-1 odds in a $51,000 Invite with a 1:49.1 clocking, a new career mark the horse equaled Friday night.

Worth the Wait: Looking over Saturday’s nine race card at Hawthorne the top two events look to be the best two, both for filly and mare pacers.

The eighth is the $12,000 Club Hawthorne Series final, a 10-horse field with the Matt Rodriguez Stable’s Dreaming Image (pp 7, Atlee Bender at 5-2) and Helen”s Girl (pp 2, Juan Franco at 3-1) as the pre-race favorites. Both come off strong wins in last Saturday’s second leg.

In fact, Dreaming Image is going for a series weep. The four-year-old mare also was an easy winner in her first leg. In both series outings she has been hammered at the betting windows, going off at 3-5 on August 7th and at 1-5 a week later,

An Open 2 in Disguise: While the filly and mare Open didn’t fill with only four entries, two of those—My Uptown Girl and Rollin Coal—were moved to race nine, a very competitive conditioned pace.

In fact, at least five other distaffers in the field, have competed in Hawthorne Opens this summer. It’s a wide-open event and it was wisely placed as the finale because it should get plenty of play with four gimmicks available to be wagered on.