Homepage
You are here: Home1 / Mike Paradise2 / Tale of Two Past ICF Kingpins

In a six year span, from 2002 through 2007, the gritty and talented state-bred pacers won Balmoral’s Dan Patch championship in five of those six racing seasons.

Ideal Towne did it in 2002 and 2003 competing out of the barn of the late Jimmy Ellison, while the star of the Clark Fairley Stable King Johnny delivered a record “threepeat” performance, proving best in 2005, 2006 and again in 2007.

A then youthful Tim Tetrick guided the Kingston gelding King Johnny to his three consecutive championships with miles of 1:51 flat, 1:50.1 and 1:50 flat for Illinoisans Marlene Fairley (Charleston) and Clark Fairley (Lerna). The now 40-year-old Tetrick’s first championship with King Johnny came at the age of 24.

Both horses sold at the old Cottonwood Farm sales, Ideal Towne in 1997 under the name Verisimilitude for $9,000 to Tim Towne of Libertyville, Illinois and King Johnny, a son of Kingston, in 1999 for $11,500 and joined the Tex Moats stable.

Only the legendary ICF pacer Taser Gun interrupted the Dan Patch dominance of Ideal Towne and King Johnny title with his victory in 2004.

Ideal Towne and King Johnny had much different paths to their Super Night achievements as aged pacers.

As a freshman Ideal Town captured both the Cardinal and Sarah Myers crowns after a second place finish in Balmoral’s $300,000 Orange & Blue. The colt banked $145,360 as a two-year-old.

Later that year the colt took a division of Du Quoin’s Dudley Hanover, was second in the $100,000 Maywood Pace, and third in the Langley championship. 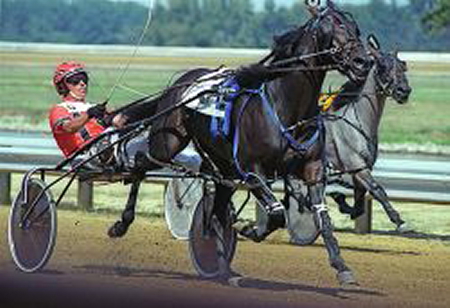 On the other hand King Johnny only had a pair of starts at the fairs for trainer Tex Moats as a two-year-old and made just $455. That winter he was sold to the Fairley’s and at three, the gelding was third or better in 16 of his 18 outings for his new barn while splitting his time between the County Fair Circuit and Balmoral Park and earning just under $30,000.

King Johnny’s racing career ended after the 2007 campaign at the age of nine, the year the gutsy gelding sped to a 1:48.4 clocking at Springfield. King Johnny would win 29 races for the Fairley stable and take in over $370,000 for his connections.

We encourage our readers who are playing the horses to support the Illinois horsemen by wagering through the Hawthorne Club app. Clubhawthorne.com. It is the only current source of income for purse generation during the Coronavirus lock down in Illinois.