Homepage
You are here: Home1 / Mike Paradise2 / Talk About a Turnabout

It wasn’t that long ago that the Illinois bred trotter Simply Swan carried a seven-race winning streak into the January 23 feature. He lost that race and another last week to the Illinois stalwart Talk About Valor and tonight the Joey Putnam trainee isn’t going to the starting gate.

In fact, Putnam doesn’t have any horses in this weekend and isn’t listed on a single local horse to drive. He’s currently mired in a 1 for 32 slump going to the Hawthorne starting gate. Vacation time? 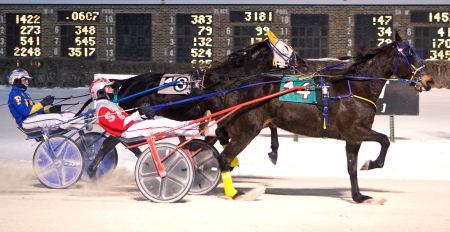 The limelight has now moved to Talk About Valor, the pride of the Gerald Hansen stable who is on a two-race winning roll, good enough to earn the seven-year-old gelding the assigned seven-slot in Saturday’s third race feature.

Driver Travis Seekman has given the 2021 Illinois Aged Male Trotter of the Year textbook journeys and Talk About Valor has shown what to do with them, pulling away to 1:57.2 and 1:55.1 miles, the latter with a speedy 27.2 last panel.

On January 23 the seven-year-old Yankee Valor gelding was sent off at 14-1. Those odds were knocked down to 5-5 last week and on tonight’s he’ll open the 2-1 morning line favorite.

Even to a novice, it’s obvious that Talk About Valor is good right now.

And Travis should know, he’s driven the gritty gelding the past three years.

“Travis really gets along well with the horse,” added Hansen.

Talk About Valor is an easy horse to spot on the racetrack. He wears a pair of bright yellow badges on his hike legs, helping support those fragile limbs that have given the horse some problems for much of his racing career.

Hansen acknowledges he pampers the “baby” of his primary owner Shelly Steele of Monee, Illinois, and rightly so. Afterall, the trotter is the primary money-maker of the stable.

“The horse will take next week off,” continued Gerry. “We’ll space out his starts just like we did last year to 12 to 15. Talk About Valor made only 11 trips postward last year and still hauled in over $67,000.

Tonight’s Open was drawn by groups and the upset winner could come from any of the groupings.

Talk About Valor has the gates speed to gain early position if that’s Travis’ strategy tonight. Either way, look for the bandaged yellow hind legs to be flying in the lane.

Oh Hum, Early Post Coming:  Hawthorne has at long last announced that the Sunday February 13 first post has been moved to two o’clock in the afternoon. That’s next Sunday, or Super Bowl Sunday, so horsemen look for a whole new Lasix and Arrival time schedule.

With Super Bowl Sunday etched in “Stone” many months ago you might think management would have made this call long before a week out.