It is very early in the 2021 Illinois harness racing season nevertheless another Steve Searle trainee could take a major step tonight and follow the hoof steps of two of her current stable-mates towards earning another Illinois Filly Trotter of Year title.

That would be Loulita, the programmed even-money favorite in tonight’s $44,500 Violet trotting stake, Last year’s division champ drew nicely with the two-slot in an 11-horse field for driver Casey Leonard and history tells us she will be very difficult to beat,

As a freshman the Flacco Family Farms homebred banked almost $90,000 while winning six of nine starts that included the Fox Valley Flan final on Hawthorne’s Night of Champions. 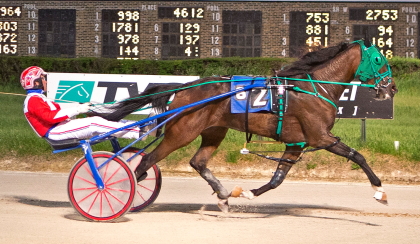 This year Lolita’s only blemish came a few weeks ago when she went off stride prepping for the first leg of the Beulah Dygert series, an event the daughter of Lou’s Legacy won easily with a new career mark of 1:57 flat. Last week she romped by almost five lengths in 1:57.3, beating some of the best ICF second season colt and gelding trotters along with Lucky Valerie, likely her main threat in the third race Violet.

Loulita has gone over the $100,000 plateau in career earnings and that total will likely grow immensely before her second season ends.

Loulita is owned by Flacco Family Farms of Alexis, Illinois and Dr. Patrick Graham of Pittsfield, Illinois, the breeder of Searle’s star trotting mare Louzotic, a 27-time winner with over $283,000 on her card.

When Loulita is warming up before the start of tonight’s initial major ICF showdown the filly might notice some familiar faces doing the same thing. That’s because Searle has three other hopefuls—Lou Lou Lamour (Juan Franco), Lous Voodoo Woman (Kyle Wilfong) and Lous Vivia (Kyle Husted)—going to the gate in the Violet.

Did I mention that all were bred by Flacco Family Farms in western Illinois?

Looking to put an end of the “Lou’s” dynasty, at least for tonight, are Breeze At Sunset (Alan Bender), Lucky Valarie (Travis Seekman), and BBR Lady (Freddie Patton Jr.) 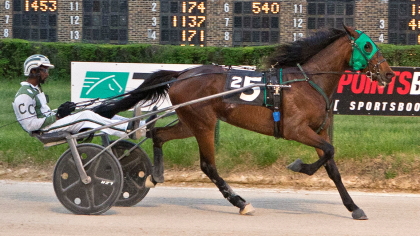 Emsroscopcoletiran, trained by his driver Cornelius Cavett, looks to make it back-to-back wins when he goes to the gate in the first of two $22,250 Cardinal stakes for ICF three-year-old male trotters. (Four Footed Fotos)

Cardinal in Two Divisions: A total of 14 ICF colts or geldings passed the entry box for tonight’s Cardinal trot making it necessary for the stake to be split into a pair of seven horse divisions, both with $22,500 pots.

The fifth race first division will see the first leg of the Erwin F. Dygert stake series winners tangle for the first time this year.  Rndmnupredictable (Casey Leonard) another Searle trainee, leaves from the seven slot, while the other earlier Dygert winner Emsroscoletrain (Cornelius Cavett) has the five,

The second Cardinal split (race seven) has the 8-5 morning line favoritism going to Coco D’Lascito, making his season debut with trainer J D Finn in the bike, The colt was 2-for-4 in a shorten season because of some health issues and made just under $20,000.

It Was a Dandy: Saturday night’s Violet pacing filly stake lived up to its billing. When the dust settled it was Scorecard Dandy (Juan Franco) winning head decision over the heavy 1-9 favorite Hart’s Heart (Kyle Wilfong).

Esther’s Delight, driven by her trainer Gary Rath, was a fast closing third in only the three-year-old filly’s third lifetime start, beaten less than one length.

After a few lead changes in the early going Hart’s Heart took command on the backside with Scorecard Dandy in striking position racing third.

Franco waited until his Gregory Kain trained filly was about midway in the last turn to come out and go after Hart’s Heart. They battled as a team down the long stretch and a last second surge by Scorecard Dandy ($14.60) saw her head get in front at the end of a 1:54.4 mile

The Secret is Out: Hawthorne is going with a new Sunday post time of 6:30 pm, effective tonight.