Homepage
You are here: Home1 / Mike Paradise2 / Thanking His Lucky Star for Springfield

The four-day harness racing meet at Springfield gets under way Friday afternoon, with eight Illinois State Fair Colt Fair stake elimination contests and a pair of prep events for next week’s championships.

The first of Friday’s two preps is for ICF 3-year-old trotting fillies. With nine entries elimination races weren’t needed. Instead those nine fillies will go in the opener, a $6,000 trot, as they prepare for the Wednesday, August 16th championship with its $44,000 purse on the line.

Anna’s Lucky Star sits atop the filly trot division, just as she did as a freshman when she used victories at the Springfield and Du Quoin State Fair championships to propel her to being named the 2016 Illinois 2-Year-Old Filly Trotter of the Year.

While any win is gratifying for a horse owner, a victory at the Springfield State Fair would be especially sweet for Anna’s Lucky Star’s owner Danny Graham.

“We love coming to Springfield,” said the Salem, Illinois native. “It’s always been the favorite place to race horses for the Grahams. We love the atmosphere with everything going on. The fans that come out to the races are there to have fun and they do.” 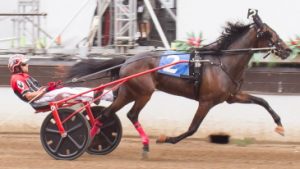 Anna’s Lucky Star, a daughter of Cassis, out of the successful ICF broodmare Queen Jamie, was unbeaten in six outings as a 2-year-old and she has captured 4 of her first 6 starts in her second season, including the Violet and the second leg of Hawthorne’s Beulah Dygert Memorial Stake Series.

The Nelson Willis trainee’s only two career losses came against male foes. She’s still perfect against other trotting fillies. Nevertheless, Danny knows that no horse is a “sure-thing” when he or she goes postward.

Danny stated, “I try to stay positive when Anna races because I know she tries so hard and never lets you down. It’s like I expect her to win but I know that’s not always going to happen. She could get sick or she could get run into, and there other variables that can happen to her. We’ve had a horse or two over the last 10 years and had a little success, but nothing like what we’ve had with Anna’s Lucky Star. I know how up and down this business can be.  I had a half-sister to Anna (Rockinprincessabbie), who cracked a knee as a 2-year-old. She had a second (Hanover) and a third (Fox Valley Flan) in two stake races before it happen. We brought her back last summer and she had two wins and two seconds in her first six starts and I said to myself: ‘boy, she’s going to be a top 3-year-old’ but instead she just kind of fizzled-out.”

The second race on Friday’ is the prep for 3-year-old state bred trotting colts and geldings, the second half of the early Daily Double.

You Can Watch and Bet: The Illinois State Fair website (https://www.illinois.gov/StateFair) will have the feed showing all of the Springfield races.  Additionally, Springfield races are being simulcast nationwide this year for pari-mutuel wagering.  Fans can watch and wager at OTB’s in Illinois along with anywhere else showing races and all major ADW platforms.

First post at Springfield for Friday, Saturday and Tuesday is at 12 noon. Next Wednesday’s closing day program will have an earlier 10am first race post.