Two more Late Closer Series wrap-up tonight and each of the trotting finals look to be very competitive events.

Illinois based trainer Steve Searle has a strong contender in both the second race $14,000 Bea Farber and the ninth race $15,000 Daryl Busse. Both of his 3-year-old’s Daisy Lou Duke and Bands Houdini own a triumph in their respective divisions and will again be driven by Kyle Husted.

When Daisy Lou Duke ended her freshman season with a victory in the Violet Final, her first leg win in the Bea Farber shouldn’t have come as a big surprise. However, her stable-mate Bands Houdini finished his first campaign going winless in 12 starts and making a modest $11,464, so his superb sophomore season start is a bit of a revelation.

In his four starts as a 3-year-old Bands Houdini has two wins, a close second, and a fourth place finish in a series leg at Hoosier Park where the winner trotted in 1:55.4. The Searle trainee came off his seven month layoff in early April with a 1:59.4 front end win on a “good” track in Indiana.

What turned Bands Houdini around over the winter?

“As a two-year-old he wasn’t fully developed, replied Searle. He wasn’t getting his air all the time. One week he would race well and then the next he would race poorly. We also treated him for EPM (Equine Protozoal Myeloencephaliti) and quit with him after his Night of Champions race.”

“Now this horse looks like a million bucks. He was always tall but now he’s filled-out and it’s all muscle. Knock on wood he’s come back pretty darn good.”

“The first time he raced at Hawthorne he was a hand-full for Kyle (Husted). So we opened-up his bridle a little bit so he could see a little more and we put some ear plugs in him and last week he was much better.”

Bands Houdini pulled away from last week’s field when he won by three lengths in 2:00.2 on a “good” racing surface. The gelding’s task got a lot tougher for the Busse Final when the draw came out. He ended up with the outside post in the nine horse field.

The draw was kinder to Bands Houdini Stable-mate Daisy Lou Duke who landed the five post in the eight horse Bea Farber Final field and is listed at 6-1 odds in the Hawthorne program.

After an easy 1:57.1 win in an opening leg of the Bea Farber Series, the 3-year-old filly’s debut, Daisy Lou Duke went off-stride leaving a week ago and eliminated herself.

“Kyle (Husted) said she was pretty aggressive behind the gate before she made the break, said Searle. Hopefully she’ll be calmer for the final. She trained down very well for her 3-year-old season and came up with a big effort in the first series leg.”

Daisy Lou Duke wasn’t the only trotter to make a break in leg two of the Bea Farber. In fact, the winner I Could Care Less also went off stride at the start but he recovered nicely and powered past in the lane for his 1:58.4 victory.

I Could Care Less is driven by his 70-year-old trainer and owner Keith Crawford who also bred the five-year-old gelding. The Michigan bred trotter will be at first flash odds of 2-1.

The favorite in the first two legs of the Farber has been Energy Bar (Mike Oosting), who was second best to I Could Care Less a week ago after a fourth place finish in leg one. The Mark P’Pool trainee landed the outside (8) slot tonight, nevertheless he’s again the 9-5 morning line choice.

The Mike Roger Stable’s BC’s Da Winner likes to do her racing on the front end and should be there with the rail tonight. The mare won 9 of 12 starts as a 3-year-old and has a second and a third place finish in the first two series legs. She’ll open at 4-1 with Rogers in the bike. 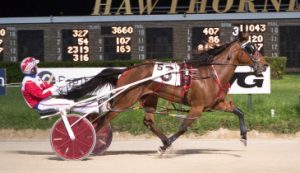 Contrasting Final Victories: Last night’s $15,800 Walter Paisley Final outcome was never in doubt as the overwhelming 1 to 9 favorite Phyllis Jean (Casey Leonard) breezed to complete a sweep of the series.

The 4-year-old ICF mare changed tactics this time around as Casey gunned her out from the three-post and into command by the time she came out of the first turn. After quarters of 28.3, :57 and 125.2, Casey turned Phyllis Jean loose in the lane and she pulled away by two-plus lengths over runner-up Leenah Pearl in the 1:53.2 mile.

Burry Me Inthesand won the photo for third place money over Alabamashakey.

Phyllis Jean has won her last four starts and six of her last seven outings. Currently trained by Leon Walker, the Henry Clay filly has banked over $54,000 this season for her Berwyn, Illinois owner Al Beals.

It was far from easy for the prohibitive 1 to 5 favorite Lady’s Party to complete her sweep of the Dave Magee Series. 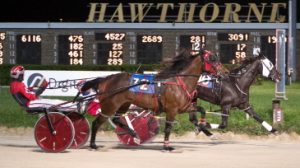 Lady’s Party (Casey Leonard) was a neck better than No. 2 Smiles Ahead (Kyle Wilfong) in the Dave Magee Final. (Four Footed Photo)

The Mike Titus trained ICF 3-year-old filly was saddled with the 10-hole and had to work very hard to make the front. Lady’s Party was parked-out from the start and driver Casey Leonard had to take her three-wide to clear to the lead at the half-mile pole, reached in 56.3.

There was no rest for Lady’s Party as she had to battle Rousey Ronda through the third quarter (1:25.2) and then fight off a strong challenge from Smiles Ahead (Kyle Wilfong) for the neck victory in 1:55.4.

Casey Leonard had winning drives in five of the nine Thursday races.