Homepage
You are here: Home1 / Mike Paradise2 / They’re Juveniles So Proceed with Caution

The opening legs of the Incredible Tillie stakes for I CF 2-year-old pacing fillies will see all 11 youngsters in a pair of $17,500 divisions go postward for the first time in a pari-mutuel race.

While on paper there appears to be two clear cut favorites in each division, A Girl Named Jim (Jamaica Patton) in the third race and Double Parked (Travis Seekman) in the fourth based on both fillies winning their respective qualifiers in comfortable fashion, remember these are 2-year-olds just beginning their racing career.

Sometimes they can get distracted by seeing a crowd of people on the apron, or louder noises than on a morning training mile or on qualifying day, so proceed with your wagering with more caution.

Other than their qualifying lines and their bloodlines, there isn’t much else to go on. It would have be great if Hawthorne provided video on qualifying races as Balmoral did for years, but that has never been offered on its web-site and this is season four since Hawthorne got back hosting harness races. The track doesn’t even make available free video of their pari-mutuel races. You need to have an account with and an ATW company to view past replays.

So maybe I can lend some assistance concerning the breeding on some of these ICF fillies. 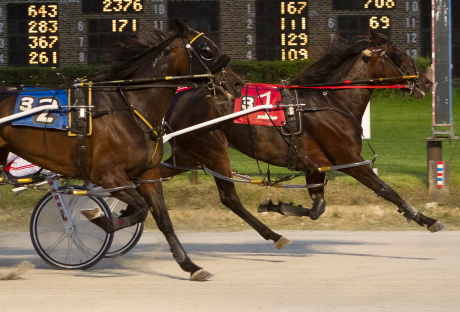 The Dale Kanitz trained Fox Valley Jazzy, a 1:52.1 winner a week ago with driver Ridge Warren, looks to make it two in a row Saturday night in race six. (Four Footd Fotos)

Ryan’s Allegra (pp 5, Kyle Wilfong) is the sixth foal of the Jate Lobell broodmare So Happy Together and her first for Flacco Family Farms. None of her earlier foals bettered 1:55.1 in their career wins. Double Parked (pp 6, Travis Seekman), is a Sportsmaster filly out of the broodmare Parkedontheroad and that makes her a half-sister to Perry Smith’s very good ICF pacer Dakota Roadster (1:51.1, $243,992), a Hawthorne winner last night.

First Easy, Second Not: Friday opening round of the Incredible Finale stakes for ICF 2-year-old make pacers saw the first $17,500 split strictly no contest but the second was a fight to the finish to determine the winner.

Bet down to 2 to 5 odds RJ Wolfy ($2.40) didn’t disappoint his many supporters as the Ronnie Roberts trained freshman drew off to almost an even dozen length victory in the $17,500 first split. Driver Casey Leonard was along for the ride in the 1:57 flat mile.

Casey had RJ Wulfy three-wide in the first turn to get to the front. After a soft 30.3 first quarter and a moderate 29.2 second quarter, Casey let the Party At Artsplace 2-year-old out a notch and his 28.1 third panel separated the winner from the rest of the field, and the final outcome wasn’t in doubt.

Illini Force, nicely handled by driver Ridge Warren, showed a lot of determination as he fought off the challenge of the 1-2 favorite Canadian Mountie and took the second Incredible Finale division to gain a three-quarter length decision in the 1:59.1 mile

Illini Force grabbed the early lead but with a slow 32 first quarter Kyle Wilfong took Bagman out of second and to the front and went to a 1:01.1 half. Meanwhile Casey Leonard had the public’s choice a close-up third. When Casey tipped Canadian Mountie out in the last turn, Warren did the same, taking Illini Force out of the pocket.

The fight was on Illini Force hanging tough on the lead the length of the stretch.

Illinois Force, a son of Sagebrush out of the 46-lifetime winning mare Bob’s Minute Maid, is trained by Kelvin Miller and owed by Allen, Kevin and Keith Miller, and Glen Otto, all of Arthur, Illinois.