Homepage
You are here: Home1 / Mike Paradise2 / This Captain Gets No Respect

Three more Late Closer Series get under way Sunday evening, two for open company3 and 4-year-old pacers and the other for strictly ICF pacers of the same age group.

The most intriguing of Sunday’s Late Closers is the eighth race initial Phil Georgeff series for colts and geldings without $10,000 lifetime in earnings. It’s a large 11-horse field with, let’s just say, an interesting Hawthorne morning line.

The 5-2 first flash favorite is No. 11 Mykindanight (Kyle Husted), a recent Lasix use who cruised last week for trainer Shawn Nessa and looks capable of winning another He’ll leave in the second tier behind the first-time starter Meetmeatthefinish (6-1, Casey Leonard) from the Terry Leonard stable. 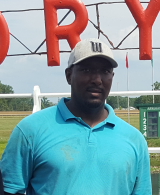 Listed in the official program’s sixth choice at 8-1 is Captain Mulzac, a first time starter
trained and driven by Ronnie Gillespie and owned by trainer Roshun Trigg.

Unraced at two, the well-bred three-year-old pacer qualified at Springfield a few weeks ago with a brisk 1:55 flat mile and was an astonishing 22 lengths the best against an eight horse field with one breaker.

I have the Captaincourageous colt out of a Rocknroll Hanover dam at 9-5 when he debuts for Trigg. The Mississippi native bought the Hanover Shoe Farm bred Captain Mulzac last November at the Harrisburg (PA) sale for a modest $15,000, considering the colt’s breeding, under the name Burkom Hanover.

When Captain Mulzac had his eye-popping Springfield qualifier a few weeks ago how impressive was it for his Mississippi owner?

“When he crossed the finish line I said: ‘What at bargain!’

“We decided not to race to let Captain Mulzac at two and instead let him fill-out and start racing him as a 3-year-old,” said Roshun. “He’s a good size horse, with a good appetite. He trained down very well over the winter. He’s eligible for this Hawthorne series and after it we’ll decide what we’ll do with him for the rest of the year.”

The fifth opening round of the Tony Salvaro Series is for fillies and mares has Laugh Out Loud (pp 4, Robert Smolin) and Admit (pp 3, Tim Curtin) as the programmed favorites at odds of 2-1 and 5-2, respectively. 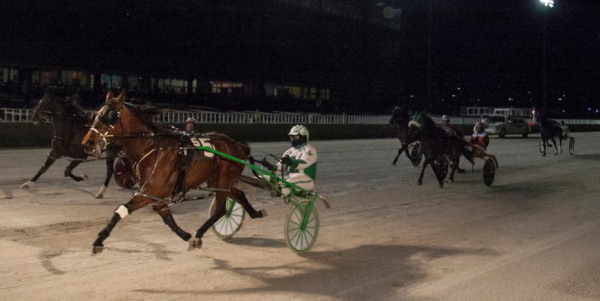 Rock Steady Ron, driven by his trainer Jamaica Patton, showed his heels to the second division field in last night’s opening round of the $9,500 Bob Larry series. (Four Footed Fotos)

In the first division Heza Real Diamonds sprinted to a quick lead with driver Kyle Hustled and Casey left hard enough with Hart To Heart to take the two-hole behind the 4-5 favorite.

Heza Diamond had a soft 29.3 first quarter followed by an even softer 31.1 second panel. Leonard was content to sit in the pocked through the last turn and pulled the winning Mike Brink trained gelding out at the three-quarters, reached 1:28.3.

Hart To Heart ($5.00) powered past, overtaking pacesetter at the sixteenth pole and pulling away by almost two lengths to win in 1:55.1 (26.1 final quarter) for Illinois owners Donna Crebs of Cantrall and Judy Conzo of Lincoln.

Patton, who also trains the 4-year-old Rockin Image gelding, urged the winner out from the five-slot and to the top in the first turn. Rock Steady Ron was effectively rated to fractions of 28.3, 58.4 and 1:28.3 and had more than enough left to hold off the late chargers for his owners John Carver (Rock Island, IL) and Ron Phillips (Athens, Il).