Homepage
You are here: Home1 / Mike Paradise2 / This Too Shall Pass

On Monday of this week, the day before Hawthorne announced it has halted its racing meet for a minimum of two weeks, following a directive from Illinois governor J B Pritzker, the track planned to race without any fans at its facility and its OTB locations to limit the spread of the Coronavirus,

That concept stirred memories of the last time I witnessed “Studio Racing” at Hawthorne.

Some 13 years ago a union strike kept the public from entering the facility for most of the first week of the 2007 Hawthorne season. 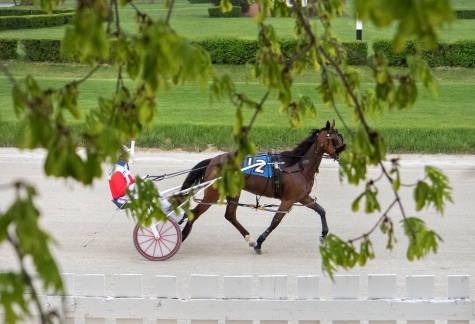 With racing temporally halted at Hawthorne, the only horses on its racetrack are those training during the daytime hours. (Four Footed Fotos)

On opening night on that balmy evening I was doing some writing for the Horseman & Fair World and had plenty of seating choices once I got past the giant inflated rubber rats that towered over the public and the horsemen entrances.

As they say, “the show” went on but it did so in a eerie quite manner. When the pacers or trotters battled down Hawthorne’s long stretch, there was no cheering from the Grandstand crowd, not even a peep from the track’s apron where a few workers watched.

The only sounds that could be heard came from horse’s hooves pounding into track’s surface, the cracking of whips and the driver’s voices as they urged their horses for all they had as they thundered down the long stretch.

Like I said, it was weird scene being there and thankfully “studio racing” lasted only a short while. This time around it’s a much more serious situation that has completely shut down racing at Hawthorne, along with the vast majority of race tracks nation-wide.

Tonight and Saturday only the two Ohio racetracks, Miami Valley Raceway and Northfield Park, in addition to Cal-Expo on the west coast, will go forward with their racing programs and they‘ll do so with their facilities closed to the public.

These are far from normal times. Uncertainty has gripped our industry and for that matter, much of our country. Nevertheless, this too shall pass.

Let’s hope that it’s a matter of weeks and not months that it does.

That’s Tight: The temporary halt to the Hawthorne meet comes after a month of weekend competition that has given us a snug driver’s race.

Mike Oosting and Kyle Wilfong are tied for the top spot with 18 dash winners each. Casey Leonard is only two behind at 16 and he’s closely followed by Todd Warren (14) and Brandon Bates (13). Then it’s Juan Franco with 9.

Ridge Warren’s driving triple last Saturday, and another win on Sunday, saw his victory number climb to eight at the meet.

Europe Racing Shut Down: France this week became the latest country in Europe to our harness racing on hold because of the ongoing coronavirus situation. It joins Italy, Germany, Belgium, Austria, The Netherlands, Finland, Norway and Denmark. Racing is continuing in Sweden but without the public in attendance.