Homepage
You are here: Home1 / Mike Paradise2 / Those Babies Are Back

The center of attention this week at Hawthorne is on ICF two-year-olds, or has most horsemen like to call them “the babies.”

Freshmen of both gaits and sexes, will be going to the starting gate for their first major event in the Illinois Department of Agriculture sponsored Cardinal and Violet stakes on the Friday, Saturday and Sunday cards. 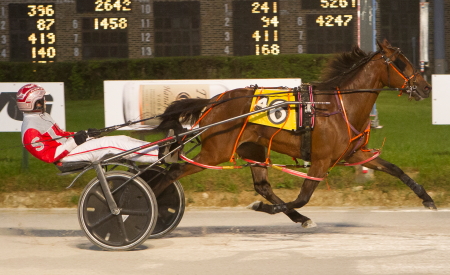 A $400 entry fee was needed for each of the Cardinal and Violet aspirants. With the owners of 15 freshman ICF pacing colts and geldings putting up that beefy payment, Saturday’s Cardinal was split into a pair of $21,825.

Sunday Observations: Charles Arthur’s Heidi High, nicely handled by driver Juan Franco, shook up things in the 3-year-old ICF filly trotting division, when she upset last year’s juvenile champion Louzotic (Kyle Husted), the star of the Steve Searle stable, who was much the best in both the first leg of the Beulah Dygert and again in the Violet.

After drawing the 9 and 10-slots in the divisions first two stake races of the year, Heidi High landed the two post Sunday and Franco took advantage of it, taking his filly to a quick lead while Husted, had to work to get the pocket, when this time Louzotic leaves from the furthest outside post. 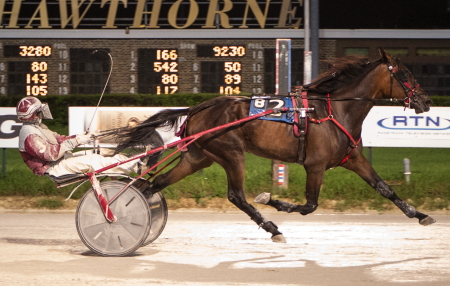 With no serious challengers, Franco was able to rate Heidi High to the three-quarters with moderate fractions of 28.3, 30.4 and 29.3. Of course, the 1 to 5 favorite Louzotic, had plenty of trot for the stretch drive and came home in a quick 27.1, however, Heidi High at 4-1, was fill of trot, too, and she also, finished with the same quick last quarter for a one and one-half length victory in 1:56.1 mile for her Mississippi trainer and owner.

It should be noted that Heidi High, also got the best of Louzotic, when they met at Hawthorne on May 17th, the first time Arthur turned over the filly’s lines to Juan.

Easy Does It: In the Erwin F. Dygert stake series for second season colts and geldings, trotters Louscardamon (Kyle Husted) and Lousraptor (Casey Leonard), followed the first leg victories with comfortable wins in the second round and have already clinched a starting berth in the Night of Champion final in mid-September.

Louscardamon pulled away to a seven-length trouncing of his opposition in his division with a 1:58.1 clocking for trainer Steve Searle and a few races later Lousraptor, uncorked a rapid 26.1 last panel, to be almost four lengths the best, at the end of a 1:57.3 mile for conditioner Roshun Trigg.