Homepage
You are here: Home1 / Mike Paradise2 / Those ICF Baby Fillies are Back

For the third time in the last four weeks, ICF freshmen pacers and trotters will be in the spotlight. This time around it’s the second leg of the various Night of Champion series.

On tap tonight is round two of the Incredible Tillie stake series for state-bred pacing fillies. A pair of $17,500 divisions will be contested with the second race drawing the most attention.

Among the six youngsters going postward are Rmissashlee (Ridge Warren), a first leg winner of the Incredible Tillie, Fox Valley Captiva (Atlee Bender), who took a division of the week’s Violet with ease, and Rollnroz, an impressive winner of her Violet, giving driver Archie Buford a night, he’ll never forget. 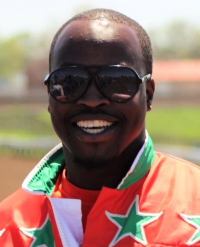 ARCHIE BUFORD . . . his first pari-mutuel driver will be one the Mississippi native won’t ever forget.

The three-length romp by Rollnroz provided Archie with his very first pari-mutuel winner and it came with a $45,000 purse on the line. Rollnroz’s 1:57.3 mile was on a “sloppy” racing surface and the daughter of Fort Knox didn’t get the easiest of trips.

Rollnroz sprinted out from the six post, four-wide going into the first turn, and was dropped into third in her Violet outing. Buford then came out with her near the half and she raced without cover through the last turn. Despite taking a lot of air, she still went on and prevailed for trainer Roshun Trigg and fellow Mississippians Eric and Rosalind Jaynes., the filly’s owners.

Rollnroz finished third, beaten almost two lengths by Rmissashlee in last month’s first “Tillie” leg nevertheless she was much the best in her Violet division.

The filly went back to the Illinois County Fair Circuit in between her Hawthorne starts and breezed in both of her fair outings.

Did that help her confidence level for last week’s Violet?

“Yes,” answered trainer Roshun Trigg. “She also had a couple of issues that needed to be taken car of and we did that. I was really happy the way she raced last week.” 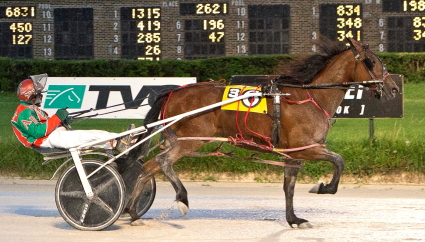 The Roshun Trigg trained two-year-old Rollnroz (Archie Buford) was all alone at the finish of her $45,000 Violet stake division. The filly goes to the gate in tonight’s second race division of the Incredible Tillie stake series. (Four Footed Fotos)

Some youngsters can get a bit nervous when people are around but not Rollnroz. “She’s a calm filly and with a good attitude. She just does everything right. She likes to eat, and she likes to race.”

Rollnroz landed the outside six-slot in tonight first “Tillie” stake, so the 34-year-old Buford may have her on the move from the get-go.

Apple Valley and Swanky Diamond were the second and third place finishers behind the Erv Miller Stable’s Fox Valley Captiva in her Violet grouping triumph.

Saturday night two $17,500 divisions of the Incredible Finale Night of Champion series for freshman state-bred male pacers will be featured.

The ICF first season trotters of both sexes get their chance to shine in a pair of “Dygert’s” on the Sunday evening card.