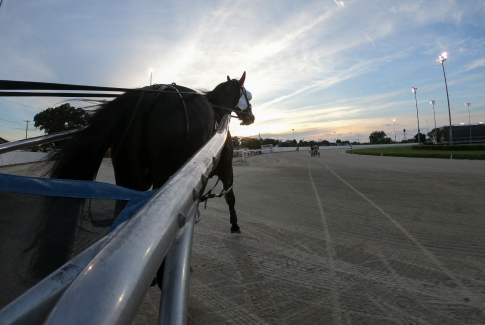 Our friends at Four Footed Fotos provided us with this rare view taken from a sulky of a horse out jogging at Hawthorne.

It’s the official first day of Summer tomorrow, so maybe it’s only fitting Hawthorne is going to a four-day week of racing format starting this evening. It’s the first of six consecutive weeks of racing Thursdays through Sundays.

They’ll go back to the previous three nights a week setup the first week of August, the month the State Fairs at Springfield and Du Quoin are conducted, and return to four days a week of live racing starting on September 1st throughout closing night on the 28th.

Meanwhile, there are some major ICF races this weekend for trainers and their owners of 3-year-old pacers and trotters. It’s leg two of the Night of Champions stake series, with important points awarded towards an opportunity for their horses to compete on Hawthorne’s showcase evening, the Night of Champions on September 21st.

Night of Champion series points are awarded in this manner: 50 for first, 25 for second, 12 for third, 8 for fourth, 5 for fifth and a single point for starting in a series leg.

Listed below is the unofficial NOC stake series point totals after the first legs derived from my calculations: 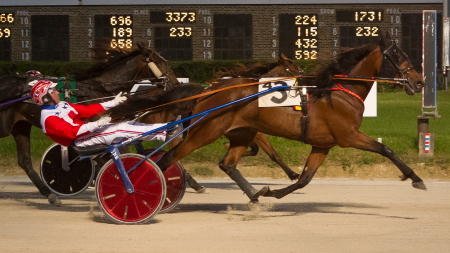 Celone Hall, driven by Casey Leonard for Springfield based trainer Mike Brink, made up more than 13 lengths when she rallied to win her $17,500 Fox Valley Flan division last Sunday night. (Four Footed Fotos)

Brink, Leonard Shine: Sunday’s opening round of the ICF freshman Fox Valley Flan (fillies) and Kadabra (colts and geldings), trotting series was a windfall for the Mike Brink stable and for driver Casey Leonard.

Brink trainees captured both of the $17,500 second division winners. Celone Hall took her Fox Valley Flan split in 2:05.4 and one race later the Springfield based horseman drove Desert Sheik to his 2:06 victory in his Kadabra division.

On Higher Ground (Ridge Warren), another Brink trained juvenile, was second best in the first Kadabra event to Fox Valley Quest, when the Tom Simmons youngster pulled away by 4 and 1/2 lengths in the his 2:03.1 mile.

Casey drove the Steve Searle stable’s Lou’s Abigail (2:05), to her winning debut in the initial Fox Valley Flan, and was also at the lines of Fox Valley Quest and Celone Hall in their winner’s circle visits.

Don’t be deceived by Celone Hall’s winning time of 2:05.4. The pacesetter Lou’s Flashy Dancer got to the half in a leisurely 1:04.3 and Celone Hall made an early break and was more than 13 lengths behind the leader at the first quarter pole. It was a gutsy comeback for Celone Hall in the home-bred trotter’s very first start.