Homepage
You are here: Home1 / Mike Paradise2 / Tim Curtin Created His Own Fireworks

Hawthorne’s longshot players cashed-in last week if they backed veteran driver Tim Curtin. The Illinois native won with a third of his drives and came up big when it counted the most, posting victories in four ICF stake eliminations, and all were double-digit winners.

In fact of the eight first place finishers Curtin had in his 24 drive span, from Sunday, June 25th through last Saturday, July 1st, only one of the 59-year-old’s winners came behind a betting favorite. 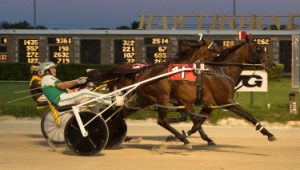 Curtin, with 3,093 career driving victories coming into this week, steered the Mike Brink’s Stable’s Ima Skydancer to the 3-year-old pacer’s surprise triumph in a $12,000 division of the Robert F. Carey memorial. The 21-1 longshot paid $43.80.

Last Friday night Curtin struck with the 3-year-old ICF Fox Valley Dandy who pulled off an upset in her Plum Peachy stake division for trainer Ray Hanna at a $17.00 mutuel.

Seeing Red and Purple: The finalists for this Saturday and Sunday’s Cardinal and Violet 2-year-old pacing and trotting stakes have been determined after last weekend’s elimination events. 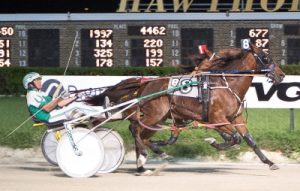 The 3-year-old filly Violet pace eliminations are Hawthorne’s Friday feature races, while the Cardinal elims for sophomore pacing colts and geldings will be part of Saturday night’s program.