Homepage
You are here: Home1 / Mike Paradise2 / Time to Put Points on the Board

With only a handful of racing nights left in July we’ll get our last look at ICF stake events this weekend on the Chicago circuit, until the month of September.

Hawthorne won’t be presenting any stake races in the month of August. Instead it’ll be the State Fairs first at Springfield (Aug. 11) and later at Du Quoin (Aug. 27) that will be the host venues for added-money state-bred contests.

That makes this Friday, Saturday and Sunday’s third round of Hawthorne’s stake series crucial for owners and trainer for their 3-year-olds to earn a lofty number of points with a high finish if they are to advance to a lucrative Final (estimated at $105,000 to $112,000 for pacers and at $78,000 for trotters) on the Night of Champions rather than compete in a $20,000 Consolation.

Friday night is the third leg of the Plum Peachy for Illinois bred sophomore filly pacers. Their male counterparts compete Saturday in the third go around of the Robert F. Carey Memorial. On Sunday evening both of the trotting Dygert’s, the Beulah for fillies and the Ervin S. for colts and geldings, will be the headliners. 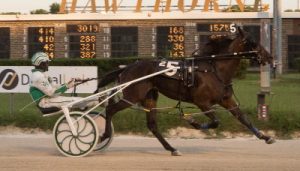 Filly Forty is the leading point earner of the Plum Peachy going into Friday’s round of the stake series. (Four Footed Photo).

After two legs of the Plum Peachy the Donna Holt Stable’s Filly Forty sits on top of the point standings with 75, getting 50 for her first leg win and 25 for a second place finish in round two.

Then comes Lady’s Party and Boogie On Down with 37 each, Rousey Ronda and My Mona Me, both with 30. Dandy’s Dududidudu is currently tenth with 24, followed closely by Ashlee’s Cocktail (20) and Windian (13). Another trio of fillies, C Far, San Antonio Rose and Razzleme Dazzleme are at 9.

Only the top ten point earners in a Hawthorne stake series advance to a championship when the September 23rd gala evening of racing rolls around.

Fox Valley Nemitz, from the stable of trainer Nick Giberson, already has sewn-up a starting berth in the Carey Championship with 100 points produced with triumphs in both of his series legs.

In good shape are Fox Valley Herbie (62 points), along with Ima Skydancer and Royale Big Guy with 55 each, and Captain Rhett at 50. Then things get a little dicey for the pacers, currently six through 12, in the Carey standings.

In Your Eye is next with 30. Decent Lawyer is at 26, one point ahead of Fox Valley Inferno. Gabe Henry has netted 20, Fox Valley Reggie has 13 and both Zone Blitz and Mississippi Rabbit have a dozen each.

All the other starters in the first two Carey legs are in single digits with two legs left before the championship.

Smart Move: Driver Mike Oosting made what turned-out to be a wise-decision in Sunday’s single leg of the Kadabra trotting stake series with Vic’s Pizza who was in the second tier with post 11.

Since there wasn’t another starter in the second tier Oosting could have put his freshman trotting behind any of the young horses in front of him going to the starting gate. He chose to line-up Vic’s Pizza behind the winning favorite New Detective (Casey Leonard) who had post three.

Oosting’s horse followed New Detective out, settled into third and came on to be second best in the stake, earning a $3,000 slice of the $12,000 purse for his owners.

Vic’s Pizza would have very likely missed a check if Mike started out behind the rail trotter Krispy K, one of five trotters in the race to off-stride before or soon after the start.