Homepage
You are here: Home1 / Mike Paradise2 / “Trashy” All Alone at Start of His Open Pace 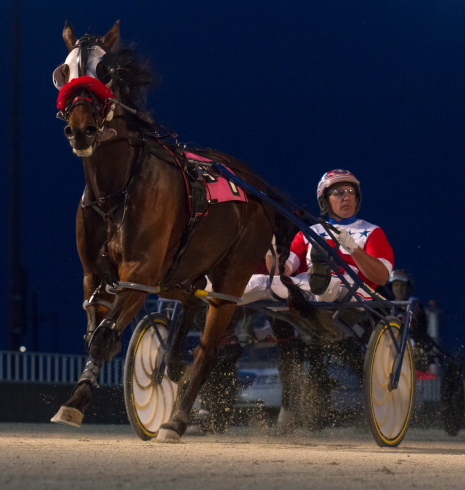 The Terry Leonard Stable’s Trashytonguetalker was all alone with his driver Casey Leonard at the finish of his last Hawthorne race and that’ll be the case at the start of tonight’s third race Open Pace. (Four Footed Fotos)

Open Pace Handicaps are commonplace at the Hawthorne meeting and when the field is big enough, it’s not unusual to see the Race Office assign the outside 10-poste to a horse.

On the other hand, how often have you see a horse in an Open Pace allocated the 10-hole, when there are only six other starters? Well, you’ll see this unique “handicap” in Friday’s third race, the first of two $10,000 Open Pace events on Friday’s card.

The horse who will be starting five slots further out than any other, is the Terry Leonard Stable’s Trashytonguetalker (Casey Leonard), a dominating front-stepping winner in both of his Open starts at the meet. He’ll be at 6-5 first flash odds.

In his last outing two weeks ago, the Art’s Chip gelding sped to a career fastest 1:50.4 clocking and likely could have gone faster if asked.

The now 6-year-old gelding, owned by his veteran Harvard, Illinois trainer Terry Leonard ,and Christopher Schick of Sacramento, California, has made eight starts this year, all at Hawthorne, and has come away with six victories.

Last year “Trashy” started his 5-year-old season in Canada, then went to Ohio and competed. Next up, was Indiana’s Hoosier Park.  He didn’t make his first of 15 starts at Hawthorne until mid-May and went on to notch 5 of his 8 wins last year with 4 coming in Hawthorne Open Paces.

Two of “Trashy’s” third race foes are the Hoosier Park invaders: Hot Rod Dylan (pp 1, Kyle Husted), a 12-time winner in 2017 for the Nelson Willis Stable, and the Perry Smith owned and trained pacer Rising To The Top (pp 5, Juan Franco), who has been unleashing some wicked last quarters in Indiana.

After a 26 flat last panel in an Open 2 at Hoosier, Rising To The Top uncorked a hard-to-believe- 25 flat final quarter. Unfortunately, the pacer’s lack of early speed had him a far back 10th, with a quarter of a mile to go in both races and the best he could manage with those rapid last quarters were a fourth and a fifth place check. 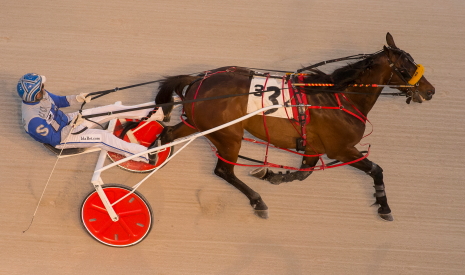 Here’s a unique view of the Perry Smith Stable’s veteran Best Man Hanover (Tyler Shehan), pulling away to his second straight victory at Hawthorne a week ago. (Four Footed Fotos)

The Perry Smith trained Best Man Hanover is 10-years-old now, but he hasn’t lost a bit of desire to come out on top in a horse race. He’s won 3 of his last 5 starts at Hawthorne, all with Tyler Shehan at his lines for owner Sawgrass Farms of Lemont, Illinois. The veteran pacer will open as the 201 morning line choice.

The way Best Man Hanover has been racing this year, an amazing total of 50 career wins is very possible. The Smith trainee already has 45 trips to a winner’s circle and he’s closing in on a half-million dollars in lifetime earning, with $485,426 on his card.

The veteran gelding used to have much of his success racing on or close to the front, but he’s shown he can also come from out-of-it at Hawthorne and had a pair of 26.1 last quarter finishes in May.

Bettor’s Promise has had some solid recent efforts for trainer Liberio Pacheco and gets a very helpful post switch tonight, going from the eight-slot to the two-post. The 7-year-old gelding took his mark of 1:50.3 earlier this year at Cal-Expo.

NOTICE OF ELECTION Getting Started
Scroll to top