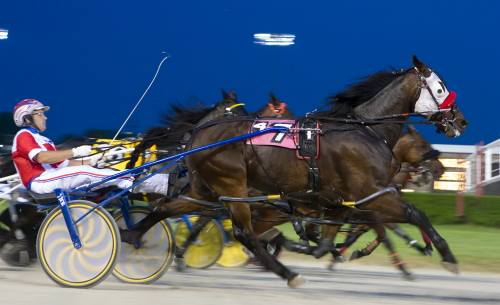 Trashytonguetalker (Casey Leonard), will be heading to the Hawthorne starting gate Friday night for the first time in two months. The Terry Leonard trainee is 7 for 8 on the Chicago circuit this year. (Four Footed Fotos)

The Terry Leonard stable’s Trashytonguetalker returns to Hawthorne Friday night after a two month absence, because the 6-year-old pacer was simply too good for competition in the early portion of the summer meet.

Trashytonguetalker (Casey Leonard), dominated the Hawthorne Opens in May and early June and ran out of competition and had to leave the state to keep racing.

“Trashy” went to Indiana in mid-June and was fourth in a Hoosier Invitational and second in an Open. In July he was sent to Minnesota to compete in the Dan Patch Free For All at Running Aces.

In his $15,000 July 12th FFA elimination, driver Dean Magee took no chances with “Trashy” gunning the pacer out at the start and rattling off first half fractions of 26.1 and 53.4. The pacer’s winning mile of 1:50.4 equaled the fastest mile ever raced at Running Aces.

However, the luck of the draw proved costly for Trashytonguetalker in the $50,000 Dan Patch Final, when he landed the second tier 10-hole. The pacer spent most of the mile parked-out and faded in the stretch as Sam Widger brought home the winner Nine Ways.

Trashytonguetalker will find a stronger field awaiting him than when he left. He landed the four post in a six-horse field with the three outside posts drawn separately from the inside three. Somestarsomewhere (Kyle Husted), winner of three consecutive Hawthorne races earlier for trainer Tom Simmons and Account Hanover (Ridge Warren), last week’s Open champion from the barn of Jim Eaton, have the five and six slots, in that order. 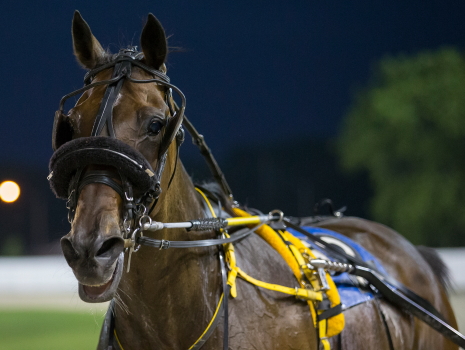 The three likely favorites are all close to each other in lifetime victories. Somestarssomewhere has 28 career wins while Trashytonguetalker has 27 and Account Hanover is right there with 26.

The three inside horses are also capable of coming out on top in the fourth race co-feature, the first of back-to-back Hawthorne Opens. They’ll be staffed by, He Gone Jack (Tim Curtin), Hoosier Park invader Granite (Kyle Wilfong) and Dakota Roadster (Travis Seekman), respectively.

Thursday’s KO’d in August: The Illinois Racing Board has given Hawthorne permission to eliminate its Thursday programs the rest of the month of August. The racetrack management justified its request because of a horse shortage, this month’s State Fairs at Springfield and Du Quoin and the County Fair circuit that is under way, as the reasons.