Homepage
You are here: Home1 / Mike Paradise2 / “Trashy’s” Move to Hawthorne was Spot-On

This week’s Open Pace for colts and geldings has a little twist to it. Tonight’s $12,500 eighth race is strictly for four and five-year-olds, leaving some of the older elite pacers at the meet back in their stalls.

A full 10-horse field will go to the starting gate in the eighth race with the post positions drawn by groups.

Hot Rod Dylan will open as the luke-warm 7-2 first flash favorite after picking up his eleventh victory of the year a week ago in a Hawthorne Open III event with a lifetime best clocking of 1:51.3 for trainer Nelson Willis. Coal Hanover took an Open II Pace two starts ago in come-from-behind fashion with a season best 1:51.2 mile.

Not surprisingly the Ken Rucker Stable’s Evergreen Elite (Ridge Warren) was assigned the outside 10-slot by the Hawthorne Race Office. The 5-year-old gelding sped to a 1:48.4 win earlier this month at Hoosier Park, almost a full second faster than his nine Friday rivals have ever paced in their racing careers.

Evergreen Elite earlier captured a $15,000 Hawthorne Open and was a close second in two others. 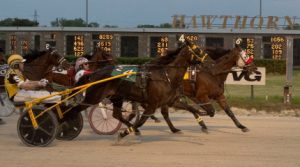 Trashytonguetalker (No. 6, Casey Leonard) is shown here in one of his recent Open Pace wins at Hawthorne. (Four Footed Photo).

Saddled with the 9-hole tonight is the Terry Leonard Stable’s Trashytonguetalker (Casey Leonard) who came to Hawthorne in May with a little more than $10,000 on his season card and had only one win in 10 tries.

The 5-year-old pacer has found Hawthorne to his liking and that’s a bit of an understatement. He’s earned almost $20,000 in his last three starts for trainer Terry Leonard and co-owner Chris Schick of California.

After a poor trip contributed to a seventh place finish on May 12th,  Trashytonguetalker has come out of it, and rattled off three straight wins, the last pair in $15,000 Open Paces. The son of Art’s Chip made almost $30,000 as a 3-year-old with 5 wins and had 6 more when he banked over $42,000 as a 4-year-old while racing primarily at Hoosier. The pacer already has $30,000-plus on this year’s card.

What brought Trashytonguetalker to Hawthorne?

Casey commented, “He’s always been a nice good horse but he’s been inconsistent. He’s had some issues in the past. We tried to spot him in certain starts at Hoosier and he did well at times but the competition is so tough over there, one of the toughest circuits in the country, it was decided to send him to Hawthorne and see how he would do racing there.”

You would have to agree the move to the Chicago circuit this summer for Trashytonguetalker was spot-on. The pacer’s last three winning final quarters were in 26.4, 26.4 and 27 flat.

“He’s a bit of a closer but I wouldn’t describe him as a stone-closer,” said Casey. “The horse has some versatility. He doesn’t have to race from far back. That’s just how things worked out lately for him.”

You may have noticed in tonight’s first race past performance lines that Lady’s Party is now being raced out of the barn of Casey’s dad Terry Leonard.

“Mike (trainer Titus) asked us before Lady’s Party last start if we would take her to our farm,” said Casey.  “Mike has got a lot going on now with the county fairs going on. He also thought maybe it was a good opportunity to try something different with her and maybe some fresh eyes would be helpful for her.”

This will be Lady’s Party first outing since the Plum Peachy some three weeks ago. The Party At Artsplace filly had to work hard to make the front from the second tier 11-slot and ended up a tiring third.

A Five Bagger: Thursday was another big night for Casey at Hawthorne. The meet’s leading driver brought home 5 of the 9 winners on the card and only one was a betting favorite.