After back-to-back career best years as a trainer Mississippi native Roshun Trigg has been busy this past winter in his home state preparing for summer harness racing in Illinois.

The 40-year-old Trigg has been getting his stable made up of mainly of ICF trotters ready for the opening of Hawthorne’s summer meet on Friday May 5th and the Illinois County Fair Circuit on June 5th through the 10th at Macon County in Decatur.

“I’ll be leaving here soon and want to get up to Illinois for the (April 21) qualifiers at Springfield,” said Roshun from his Mississippi home where the winter weather was considerably balmier compared to the Chicago area. 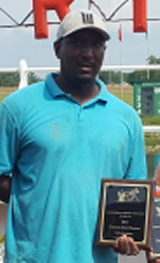 Trigg says it’s still too early to determine what 2-year-old Illinois-breds in his barn look like the cream of his crop but he does have high hopes on his now 3-year-old filly trotter Silver Charm who banked over $30,000 as a freshman for her owners Flacco Family Farms of Alexis, Illinois.

A daughter of Lou’s Legacy, Lou’s Silver Star finished her first campaign with back-to-back victories at Springfield in Fall Classic events where she established her freshman mark of 2:00.2. For the year she had 5 wins, 4 seconds and 3 thirds in 16 starts.

“Silver Star could have a good year for me. She’s coming along strong as a 3-year-old, “said Roshun.

In 2016 Roshun’s win total from his barn jumped from 55 to 86. Last year his horses made 96 stops at a winner’s circle. At the same time, purse money won by his stable more than doubled as well.

A winner of 19 career starts in 40 trips postward. Louscipher raced out of the barn of trainer Ronnie Gillespie during Hawthorne’s winter meet mostly in Open Trots as did Lou’s Credit Report. Both trotters went 2-for-6 at the meet.

Lou’s Credit Report made six winner circle stops in 21 tries in his sophomore campaign when she banked $70,655 for the Flacco Family Farms. The filly was the 2017 runner-up in Hawthorne’s Violet Final and Du Quoin’s Windy Skeeter. She also competed in Opens at the winter meet.

Roshun’s specialty through the years has been developing young ICF trotters and bringing them up to Illinois to compete. In fact, his very first winning horse as a trainer back in 1999 was a freshman filly trotter named Giraffe Girl who won her Shawnee stake elimination at Du Quoin with Tom D. Tetrick at her lines.

“Giraffe Girl was a big mare and was kind of a hard trotter to break because of her attitude but sometimes those kinds of horses turn out to be the best ones. She came around at the right time.”

Springfield Entries Due: Entries for ICF 3-year-olds and up to race at the Illinois State Fair Grounds on April 21st are due this upcoming Wednesday (April 18th). A $50 fee is required to compete in either the Springfield races or qualifiers,