Going into last Sunday’s tenth race at Hawthorne a triple dead-heat to win had occurred only 27 times in the entire history of harness racing and it had never happened on the Chicago Standardbred Circuit.

Not at Sportsman’s. Not at Balmoral, Not at Maywood and until last Sunday not at Hawthorne. 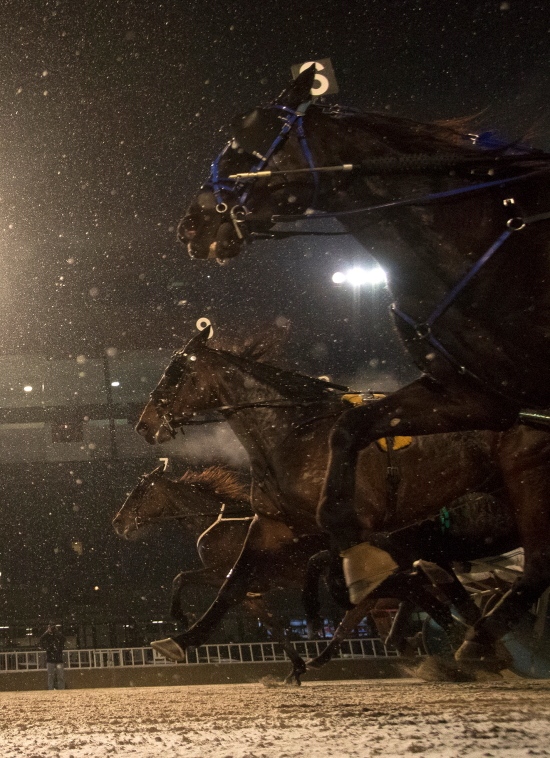 Here’s a spectacular photo, compliments of Four Footed Fotos, of the Chicago harness racing circuit’s first triple dead-heat to win ever. It came about last Sunday at Hawthorne when the trotters No. 6 Picky Picky Valor (lower), No. 9 Keep The Cash (middle) and No. 6 Skyway Jaylo (top), all hit the finish line at the same time in the tenth race.

In fact, it’s highly improbable a “triple heater” ever transpired anywhere in Illinois because it didn’t take place at the State Fairs meets at Springfield and Du Quoin, along with the past defunct Prairie-State harness racing meetings at Washington Park, Aurora Downs, Fairmount Park, Quad City Downs, Arlington Park and Cahokia Downs.

History records at the Illinois County Fairs are sketchy, so I can’t rule them out with absolute certainty but I have serious doubts any came about there.

So Illinois harness racing history all changed when Picky Picky Valor (Casey Leonard), Keep The Cash (Keith Crawford) and Skyway Jaylo (Larry Lee Smith), all got their noses on the finish wire at the exact same time in Sunday’s Open III Trot.

The 10th race horse field was so bunched-up at the finish that the ninth and last place trotter Primed N Powerful was only beaten by two lengths from the trio of winners who recorded the sport’s 28th triple dead heat to win.

Balmoral Park did have a very rare triple dead-heat for second place back in late September of 2007.

Oldies and Goodies: The cliché “It’s a young man’s game” certainly didn’t fit its narrative on Hawthorne’s winter meet opening night last Friday. Of the ten races contested with freezing temperatures (eight below zero at post time), four were won by horses making their 2017 debuts at the age of 10 or 11.

Stonebridge Lyric triumphed for the 52nd time. Bestman Hanover notched win No. 42 while Mobile Big John got his 41st. Wings posted her 29th, however, she has started about 100 times less than the above trio.

The three gelding pacers had over 220 lifetime starts each and Wings was making her 124th career outing, so racing in the bitter cold was something they’ve done dozens and dozens of times. Maybe they’re smart enough to know the faster you race in the cold, the faster you get to go inside to a warm paddock.