Homepage
You are here: Home1 / Mike Paradise2 / Trotting Out the Cardinal and Violet

With 17 ICF freshman trotters entered for Sunday night’s Illinois Department of Agriculture’s Cardinal a pair of $22,775 divisions were necessary for the initial major state-bred trotting stake of the summer.

Five of the 17 youngsters in the Cardinal events are all from the stable of trainer Roshun Trigg.

Priority Lou made a break at the start debuting in the first leg of the Kadabra where Coco D’Lascito (Casey Leonard) was hand driven to the wire of the 2:01.4 mile. The five-length winner is trained by Jenna Lubbeck for owner and breeder Sam Daddono of Grant Park, Illinois.

Shady Maple Spirit (Mike Oosting), the second place finisher in the opening round of the Kadabra, is the other first Cardinal division hopeful.

In between Sunday’s two Cardinal events is the $46,000 Violet Trot. Ten juvenile fillies entered the stake but three were found to be not eligible so a field of seven will go to the gate tonight.

The pole position belongs to the Erv Miller trained filly Myonly Sin (Mike Oosting) who brought $20,000 at the 2019 Illinois Classic Sale. The Lou’s Legacy filly qualified twice at Hoosier Park for this race and will likely get good play.

Fox Valley Flan first leg runner-up Lolita (Kyle Husted) should also get a significant portion of the public’s wagering dollar after trotting a 27.4 last quarter in the “Flan.” 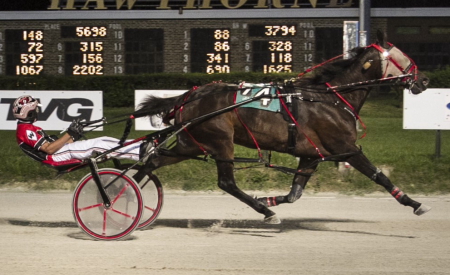 It’s Time For Fun (Kyle Wilfong) returns from Indiana for tonight
s Open pace for fillies and mares, a race she won at Hawthorne two weeks ago. (Four Footed Fotos)

The Curt Grummel trained filly Bobalou is a major threat off her solid winning event at Springfield. Nevertheless the USTA’s computer generated morning line of even-money seems to me to be too strong for a freshman trotter just making her pari-mutuel debut.

At this time of the juvenile campaign words like “Unpredictable,” “Erratic,” and “Fickle” are sometimes used to describe two-year-old trotters. On the other hand there could be a titleholder on the next Night of Champions competing tonight.

Distaff Delight: After a one week absence the circuit’s $10,500 Open Pace for fillies and mares returns with the last two Sunday overnight feature winners handicapped with the two outside posts.

Tempus Seelster was assigned the 10-hole in the June 28th Open and it proved to be her downfall. The seven-year-old Rob Rittof trainee was parked out by some longshots to a 27.1 first panel and was pressured to a 55 half, so she was understandably a tiring mare in the lane.

Chalk Up Another: Driver Ridge Warren gave the 4-5 favorite Connie On The Go ($3.80) a second-over trip and the Jamaica Patton trained filly used the favorable journey to wear down the pace-setting Princess Mooss (Kyle Wilfong) in the lane to gain a neck victory in last night’s $43,100 Violet Pace for two-year-old state bred fillies.

The first over Clearly The Bomb (Todd Warren) finished third.

The triumph was the second consecutive stakes victory for Connie On The Go. The Sportsmaster filly took Hawthorne’s opening leg of the Incredible Tillie stake series two week ago for Illinois owners Ron Phillips (Athens) and John Carver (Rock Island).