Everybody loves a winning horse, especially when that pacer or trotter rattles off a streak of successful races in a row. Going into Sunday night we have two pacers doing just that at Hawthorne—the current Open mare champion Lily’s Grace and the three-year-old filly Brooke’s Ocean.

Both distaffers have put together five consecutive victories.

The five-year-old Lily’s Grace joined the Frank Petrelli stable in early January of this year after spending her first two seasons competing in Ohio and Indiana where she finished first 11 times in 51 trips postward with a mark of 1:52.4 taken in 2018 at Northfield Park.

A respectable record but nowhere near what she has so far accomplished on the Chicago circuit this season. 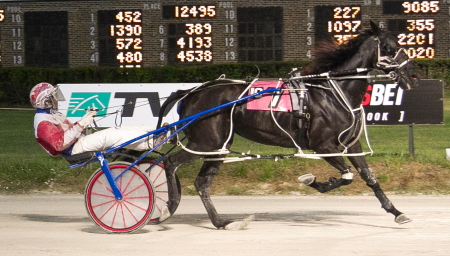 After Lily’s Grace had one unproductive start in January at Pompano Park, the Shark Gesture mare came to Hawthorne for owners Trot & Pace Racing of Farewell, Michigan and found its full mile racetrack to her liking, to say the least. Following a second place finish in a local high-level conditioned pace Casey Leonard took over the mare’s lines and she hasn’t lost a race since.

Lily Grace was eligible for the Club Hawthorne Mini-Series and Petrelli’s decision to race her there proved to be a wise move for the New York State based horseman and the mare’s owners. She went out and won her first leg of the series in 1:51.1, shaving more than two full seconds off her previous fastest mile.

After sweeping the series at odds of 2-5, 1-9 and 1-5 in a trio of romping wins, the now confident mare took a big class hike up to the circuit’s Open Pace ranks and is having the same success with two more convincing triumphs while adding another $11,000 added to her purse earnings.

Lady Grace (Casey Leonard) will have to be at her best tonight if sheis to extend her winning streak to six in a row. The five-year-old mare was assigned the outside 10-hole and will have a couple of new Open additions to take on in the $10,500 feature.

Back from Hoosier Park is Rock It Out (pp 1, Ridge Warren), a winner of four consecutive races earlier and three came during her sweep of the Walter Paisley Late Closer Series,

The other is a familiar name to Illinois racing fans.

Allbeastnobeauuty (Todd Warren), who had some very successful seasons in he4r home state as a two and three-year-old for trainer Mike Brink, shipped in from Ohio where she’s been a money-maker for the past two seasons. The now six-year-old mare made almost $90,000 in 2019 and lowered her mark to 1:50.4 at Ohio’s Dayton Raceway and was named last season’s Illinois Aged Pacing Mare of the Year. She’s banked nearly $50,000 more in 2020. 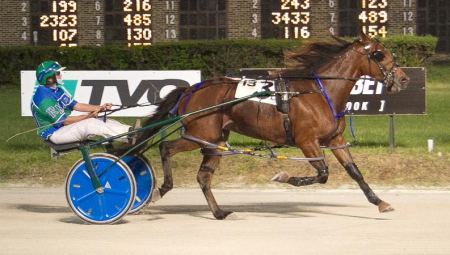 Brooke Also Hot: That takes us to Brooke’s Ocean, who also in in tonight in search of her sixth straight at Hawthorne. She’ll go in race three at a higher conditioned race level than on her previous five winning starts with regular driver Brandon Bates.

The home-bred Brooke’s Ocean began her three-year-old campaign with one ineffective start as a freshman that came in late September. Her owner, breeder and trainer Michele Morgan decided to take her time bringing her mare back for her second season.

Brooke’s Ocean qualified in mid-June with Brandon Bates in 1:56.4 and the filly’s 27.2 last quarter did get the attention of a lot of Hawthorne players. Brooke’s Ocean went off at 4-5 in her sophomore debut, winning in 1:57.4 with a rapid 26.3 last panel and that was just the start of more good things to come for her Carrollton, Illinois proprietor.

The Real Desire filly has added four more straight wins since with her fastest a 1:52.4 clocking on July 5. She’s put $14,500 on her season card for Mickey who drove her home-bred to a first place finish on July10. Brandon Bates, the filly’s regular driver, followed with his 1,000th career dash winner a week ago.

Brooke’s Ocean is the second foal of Mickey’s broodmare’s Imnotasonofabeach. Her first was I’m Over The Enjen, a daughter pf Major Bombay, and a 1:55.3 Hawthorne winner earlier in the meeting. She’ll compete tonight in race eleven.

Mom and Daughter: It’s rare but from time-to-time you might see two siblings race on the same card but have you ever seen a mother and a daughter go postward on the same program?

I’ve been around a long time and I can’t remember one but I’ll admit my memory isn’t quite as sharp as it once was.