The Hawthorne Race Office entry box for Thursday’s card was flooded, especially with trainers wanting to get their 2-year-old pacers raced. As it turned out, most of them will. No less than an even half dozen events for freshman will make up the 10 race program.

Tonight’s two-year-old contests start with race two and go through race seven with both ICF and open company freshman squaring up. A trio of the paces is for colts and geldings and the other three for fillies.

The lion’s share of the ICF juveniles competing tonight went postward in the opening round legs of last Friday or Saturday’s Incredible Tillie (fillies) or Incredible Finale (colts) stake series and are now being pointed to next weekend’s (July 1 and July 2) Cardinal or Violet state-bred stake eliminations. 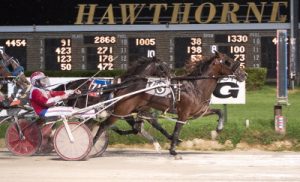 Cardinal eligible pacers from race three Thursday are Beach Shootingstar, Smokin Eyes, Molina and JB’s Enigma. Herman Wheeler’s Molina (Kyle Husted) was a close second in his Incredible Finale race while the Tom Simmons Stable’s Beach Shootingstar made up a ton of ground in the stretch to finish fourth in his division.

Six freshmen nominated for the Cardinal—Shooting Straight, Majesticterminator, Ricky The Flash, Not Me Gram, Bootleg Island and Max Hotspur—in race six will have to take on the M T Gunslinger, trained and driven by Charles Arthur, who was a romping seven length winner in his initial start and is listed at low-end 4-5 odds in the morning line.

The eight-horse fourth race for first season fillies, has seven Violet hopefuls in it: Breathtaking Sky, Shooting Cool, Over Speeding, Yank’s Rendezvous, Fancy Creek Annie , Shelly On My Mind and Darlin Dune. No. 1 Allbeastnobeauty wasn’t nominated for the Violet.

On June 15 Dee Rocks, a Rockin Image filly, led from start to finish in her winning in 1:57.2 and most impressively paced a sizzling 25.4 last panel.

Fox Valley Miranda is trained by Martin Woodward for Fox Valley Standardbreds and had a 1:58 flat winning qualifier a week ago at Hawthorne with Matt Avenatti at her lines.

“Miranda” is a daughter of Yankee Skyscaper out of the Sportsmaster dam Slammin Annie and six of her foals took lifetime marks under 1:55 with the fastest by 2008 Woodrow Wilson champion Fox Valley Barzgar, a 1:50.2 mile in that prestigious $370,414 Meadowlands freshman stake.