Homepage
You are here: Home1 / Mike Paradise2 / Uneven Stakes Split a Boon for Some Aspirants

By Mike Paradise
Everyone realizes how important the draw for post positions can be in any horse race but for a trainer and his or her owner just how a race is split in a stake series could be even more crucial.
With Hawthorne’s Night of Champion final fields in September determined on a point system (50 for first, 25 for second, 12 for third, 8 for fourth and 5 for fifth), pacers in Saturday’s first division of the Robert F. Carey Memorial stake series, have a chance to “make hay.”
It turns out the second leg of the first Carey split doesn’t have a pacer who finished first or second in the opening leg while the second eight-horse field has them all, plus the pre-stake favorite who was absent in the June 4 opener.
The Nelson Willis Stable’s Dan D Dune, winner of over $220,000 as a 2-year-old and the Orange and Blue Colt Super Night champion, missed the Carey’s first leg due to sickness.
Dan D Dune (Casey Leonard) got a needed start a week ago against older horses and finished with plenty of pace (26.4) prepping for tonight’s stake event. The Duneside Perch gelding drew the outside 8-slot in race seven and has some rugged state-bred foes inside of him. 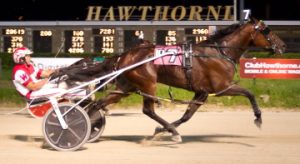 Carey first leg victors Holdonwe’rerolling, shown in a Four Footed Photo winning with Todd Warren, and Caffeine Kid (Dale Hiteman) landed the one and two posts, respectively. Goingduneside (Travis Seekman) and Royale Rose (Matt Krueger), the second place horses, drew posts three and four, in that order,
BS Tyriffic (Kyle Wilfong), Impressive Art (Randall Finn) and Wondrous Sport (Tim Curtin) are the other second Carey division aspirants.
With the absence at Hawthorne of strictly ICF 3-year-old male races since the first Carey leg all of the second division participants have had to compete in open company against older horses. That’s how the Rodney Freese Stable’s Caffeine’s Kid’s five race winning streak came to an end last month.
Friday’s first Carey split likely will see the Watson Stable’s IYQ (Trenton Watson), as the post-time favorite despite missing the last month. He’s 3-2 in my line after a strong 1:55.4 front-end qualifier with a 27.2 last quarter on June 24. The 3-year-old may be going right to the front leaving from the pole position.
Sagebrush Sam (Casey Leonard), Fox Valley Eli (Pat Curtin), Bowedfortyova (Kyle Husted), JB’s Hero (Bobby Smolin), He Gone Jack (Matt Krueger) and Red Dog Ryan (Dale Hiteman) will also have their sights set on the $6,250 winner’s share of the sixth race purse.
In Easy Fashion: The second legs of the Plum Peachy stake series for 3-year-oldpacing fillies were decided Friday night with Bucklegirl Bobette an easy winner in the first $12,500 split in front end fashion for driver Kyle Wilfong.

(Four Footed Photo)
The Bob Walker trained filly shot to the front from the three-slot and led at every pole on her way to a career fastest 1:54.4 clocking for her Illinois owners Hart Walker, Robert Walker, Charles Walker and Robyn Klinger, all of Carrollton, Illinois.
After a :28.4, Wilfong was able to give Bucklegirl Bobette a 31.2 second quarter breather. The filly had no trouble holding the first-up Ashlee’s Fine Lady parked-out through a 28.2 third quarter and her 27.2 last quarter was more than enough to hold off Dandy’s Diva by one and one-half length. LK’s Nancy Lee shook lose to be third, another neck behind.
The second Plum Peachy split turned out to strictly no contest as the 4-5 favorite Char N Marg (Casey Leonard) was much the best winning by five and one-half lengths in 1:53 while well in hand to the wire.
The Nelson Willis trained filly, owned by Quaid Racing of Chicago, was making her first start on Lasix.
Casey was contend to drop Char N Marg ($3.60) into fourth in the early going while Art Angel Baby took the field to a 28.1 first quarter. Leonard then topped his filly out at the quarter and before the 57 flat half the Sportsmaster filly was on top and the issue wasn’t in doubt,
Likeafireballshot came on for second while Whiskeronkittens rallied from far out of it for the third place check of the $12,500 sixth race pot.