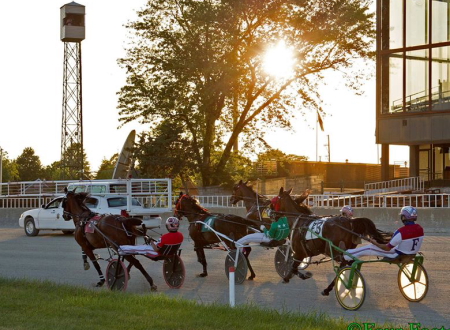 There are only three weekends of racing left this season for horses to head into the turn at Hawthorne. (Four Footed Fotos)

It’s hard to believe that it is already September and there are just three weekends of racing left at Hawthorne for the year. Nevertheless that’s the case and the of march to the Night of Champions will come about in 15 days.

It’s been one of the most memorable racing seasons in Illinois but unfortunately not for the right kind of reasons. The Covid-19 epidemic had a critical impact on our industry just as it has on so many others in our country.

An expected lengthy eight month harness racing season in Illinois was reduced by three months when our sport was shut down on a national level. It’s also been the only racing season that I can remember without fans, severely cutting into the bottom line at Hawthorne and at other major racing venues elsewhere.

A purse cut on the local scene couldn’t be avoided with no on-track handle coming in all season long and attendance at Illinois OTB parlors and its handle down substantially with many of our likely patrons simply too afraid to venture out with the possible consequence being so dire.

This year Hawthorne had no concession sales income coming in and the same can be said for any attendance money or parking revenue. And I’m sure program sales this year were at an all-time low.

I thought a second purse cut occurring was a sure thing. I’m happy to say I was wrong. A well-deserved tip of the cap goes out to Hawthorne management for holding off on another financial hit on those who depend on the Illinois racing revenue stream to make a living.

Kudos to the horsemen, Hawthorne and the state for getting together and doing what had to be done to get through the most extraordinary racing period in my 48 years of covering Illinois Standardbreds.

Time Out for Some: What you won’t be seeing this weekend at Hawthorne is the vast majority of the top level two-year-old state bred pacers and trotters in action.

After three consecutive weeks of ICF stakes in the rear view mirror and those all-important Night of Champions series final legs on tap next weekend those youngsters are enjoying a well-earned week off from racing.

Open Resumes: The circuit’s Open Pace is back tonight and that means Fox Valley Gemini (Casey Leonard) will be on the outside looking in when the sixth race feature goes off.

Riding another three-race win streak Illinois most popular race horse, as expected, was assigned the 10-hole in a seven horse field. The five-year-old Terry Leonard trainee can go over the half-million plateau in purse earnings with a victory tonight for owner Jim Ballinger of Atwater, Illinois.

The first six posts will be manned by Rollwith Lachilan A (Kyle Wilfong), a Australia bred making his U.S. debut, On Duty (Jim Lackey), I’m An Athlete (Ryan Anderson), Allmyx’slinentexas (Travis Seekman), Dash Of Danger (Kyle Husted) and Ponda’s Prospect (Ridge Warren), a stable-mate of Fox Valley Gemini and the last horse to beat the two-time Illinois Harness Horse of the Year.

Back to Normal: Those recent 16 race programs are history now that the State Fair Illinois bred stakes shifted to Hawthorne is over. The customary 7:10 first post returns this weekend.