If you asked followers of the Chicago Circuit harness racing which horse won Hawthorne’s 2019 Night of Champions two-year-old filly pace final most would know it was Fox Valley Exploit.

On the other hand if you questioned those same harness racing fans which horse finished second, the majority likely wouldn’t know the answer.

Ii was Sign Her Up, driven by Juan Franco for her Jackson, Mississippi owners RP Roper and Fabian Johnson.

The Sagebrush filly spent of first half of her freshman season in relative obscurity, earning about $1,000 a start in her first six races. However as we all know, it’s not how you start, instead it’s how you finish and Sign Her Up finished her first campaign making $62,683, averaging better than an $8,000 paycheck in her final seven trips to the gate for three different trainers. 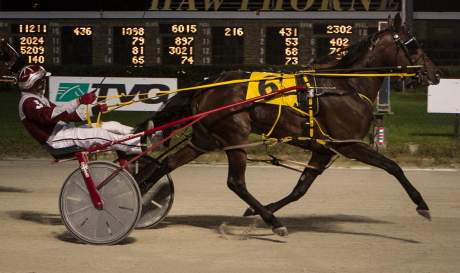 The ICF filly Sign Her Up (Juan Franco) came on in the latter part of her two-year-old season to be a money-maker for her Mississippi owners. (Four Footed Fotos)

Sign Her Up’s rise from a “pretender” in the ICF freshman filly pace division to a “contender” coincided when Juan Franco took over the driving chores on the filly.

Sign Her Up was still learning to be a racehorse when she collected a fourth and a fifth place check in the first two legs of the Incredible Tillie stake series and was third in the Violet, all with her first trainer Cordarlius Stewart at the filly’s lines.

It wasn’t until August 4th, in Sign Her Up’s seventh lifetime start, that she made a stop at a winner’s circle. That’s when the Stewart trained youngster posted an easy 3 and 1/2 length victory in an $11,112 division of Illinois Stallion Stakes at the Mount Sterling Fair with driver Derrick Flowers, no doubt a confidence booster for the filly

Five days later at Springfield Franco made the most of his first opportunity guiding Sign Her Up, now trained by co-owner Fabian Johnson. The 10-1 longshot uncorked a 26.3 last quarter, with the help of a superb trip from her Guatemala native driver, and beat division rivals Sleazy Gal and Fox Valley Exploit in their Illinois Fair Colt Stakes elimination with a season best time of 1:54.1.

However in the Springfield final the journey for Sign Her Up turned out to far from favorable and the filly ended up a far-back fourth to the winner Sleazy Gal.

Next was Du Quoin’s Director Awards stake, raced at Hawthorne after some rainy days kept it from being held in Southern Illinois. Sign Her Up picked-up almost another $6,000 with her second place finish. A week later she won a Hawthorne conditioned race while prepping for the third and last leg of the Incredible Tillie stake series.

That September night Sign Her Up was again fastest in the lane, pacing a 27.1 last panel with Franco, powering past Fox Valley Exploit, the victim of a wide mile, and topping the 4-5 favorite by two-lengths while adding the $10,000 winner’s share of the purse to her growing bankroll.

Franco gave Sign Her Up a ground-saving inside three-hole trip in the $115,000 Incredible Tillie Championship but that showcase evening belonged to Fox Valley Exploit who was three-plus lengths ahead at the end of a 1:55.2 mile on the Night of Champions event raced on a sloppy track.

Sign Her Up performed out of the barn of trainer Charles Arthur on the Night of Champions when she raked-in over $25,000 in purse money with her runner-up finish. The under-the-radar state-bred Sagebrush filly earned over $35,000 in her last pair of juvenile starts.

Sign Her Up, and all the other major ICF sophomore pacing fillies, is being pointed for the first leg of the Plum Peachy stake series, scheduled for May 23rd. One week later is the Violet stake.