When you’re dealing with two-year-old trotters early in their season the phrase “Expect the Unexpected” should enter your thought process when trying to analyze which horse will come out on top in Sunday’s ICF juvenile stake races.

The results of first two state-bred stakes for juvenile trotters has already shown us anything can happen in this often unpredictable division. So be prepared for a possible unanticipated happenings when two $17,500 divisions of the Fox Valley Fan for fillies and the Kadabra fir colts and geldings take to the racetrack in the middle of Sunday’s card as these youngsters compete in round two of their march towards Hawthorne’s Nigh6 of Champions.

The Fox Valley Flan splits will go as races six and eight while the Kadabra hopefuls vie in race seven and nine. In both cases, the stronger fields tangle in their respective second divisions. 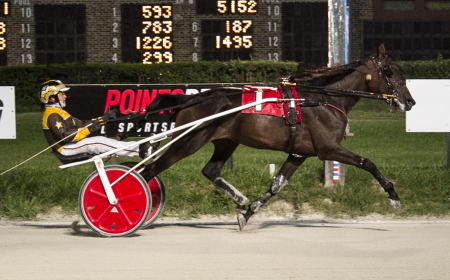 If racing experience is an asset for a freshman trotter, and I believe it is, then Steve Renard’s Lous Voodoo Woman (pp 6, Kyle Wilfong) is a strong candidate. The Steve Searle trainee has already gone postward 10 times this season and that’s the same amount all of her seven foes tonight have accomplished combined.

While the Illinois County Fair circuit has been kayoed by the Covid virus, some other states, such as Iowa, have held country fair races and Renard has taken his filly there four times this summer. In between she’s raced Lous Voodoo Woman five times at Springfield, so she was ready to roll when the first Fox Valley Flan arrived on June 30th. Kyle Wilfong took over the lines and the result was a 2:01.3 front-end victory. She’s the 5-2 programmed second choice.

BC’s Rose (9-2, Curt Grummel), second best in the Violet in her very first start, and Louita (3-1, Kyle Husted), the first Fox Valley Flan bridesmaid who made a break as the 4-5 Violet favorite, certainly are possibilities as well. Longshots Lacey Lou (Cornardius Stewart) and More Than Honey (Juan Franco) complete the field. 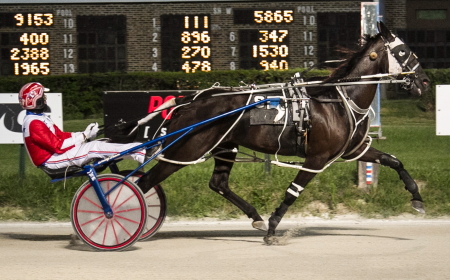 Shady Maple Valor (Freddie Patton Jr) looks to follow-up his win in a division of the Cardinal trot with another in a division of tonight’s Kadabra stake series for two-year-old trotting colts and geldings. (Four Foot Fotos)

Shady Maple Spirit (programmed at 3-1) and Shady Maple Valor (9-2) , both sons of Yankee Valor, pulled off double-digit upsets in their respective $22,775 Cardinal divisions, while the Lous Legacy colt Coco D’Lascito, a romping 2:01.1 winner in the June 28th Kadabra, couldn’t stay on stride last week as the prohibitive 1 to 5 favorite. He’ll be at 8-5 first flash odds

Then there’s Kyle Husted’s Lousrolando (7-2) who got a great trip from her trainer and part-owner when he dropped a scant nose decision to Shady Maple Valor.

Go Connie Go: Bet down to 1 to 5 odds Connie On the Go (Ridge Warren) didn’t disappoint her many supporters with an easy victory in last night’s $17,550 second round of the Incredible Tillie stake series. The pride of the Jamaica Patton stable finished almost two lengths ahead of Princess Moose (Kyle Stewart) at the end of a 1:58 mile.