As we pointed out a couple of weeks ago on the eve of the Violet Final, this season’s ICF 3-year-old filly pacing division has been unpredictable.

If it seems like the 2017 crop of state-bred sophomores are taking turns beating one another, that’s because that’s exactly what is happening. In fact none of tonight’s Plum Peachy starters have won two races in a row this year except Lady’s Party and her three straight came in the Late Closer Dave Magee Series back in May when she was taking on easier foes.

The third go around in tonight’s Plum Peachy stake series was split into two divisions each with an increased pot (from $12,000 to $16,000) on the line this time.

The Donna Holt Stable’s Filly Forty (Jamaica Patton) was a first division winner of the Plum Peachy and was second in the next round. She secured her second win of the season a few weeks later in a Violet elimination.

However, Filly Forty obviously wasn’t right for the Violet Final when she was in the two-hole at a 58 first half, but ended up tenth and last at the finish, some 10 lengths behind and she drew the outside seven-slot in the first race. 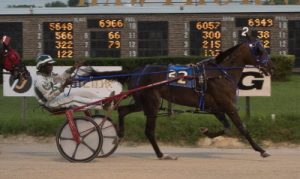 The 2016 Illinois Horse of the Year Princess Sage (Freddie Patton, Jr.) is having an up and down season in her 3-year-old campaign due to some health issues. She was much better (1:53.1) in round one of her Plum Peachy, but hasn’t been better than fourth in a trio of outings since.

Clark Fairley’s Fox Valley Charliz is one of two fillies in tonight’s first division without a win yet this season, but she does have four second place finishes in nine trips postward and drew nicely with the two-slot for regular driver Mike Oosting.

Boogie O Down (pp 3, Kyle Wilfong) had a second and a third in her Plum Peachy starts and then picked-up her initial season win a week ago, winning in convincing fashion in 1:54 flat despite leaving from the 10-hole

Fox Valley Dandy (pp5, Matt Krueger) was a game winner in her first Plum Peachy but had a pair of disappointing finishes in her two starts that followed.

My Mona Me (pp1, Tim Curtin) and C Far (pp6, Gary Rath), both listed as 20-1 longshot in the morning line, are tonight’s two other first division aspirants.

Fancy Creek Jolene was a surprise winner at 45-1 odds in her Plum Peachy but made a break and finished up the track in the second round. She rebounded big-time for trainer Kim Hamilton with a late-charging 1:53.2 triumph in the Violet Final, this time at 10-1 odds.

A Real Doozie from the barn of trainer Mike Brink, and the Terry Leonard Stable’s Lady’s Party have been the most consistent fillies in the division.

A Real Doozie is a three-time season winner and one of those wins came in the first Plum Peachy. She got nosed-out in her Violet elimination and was roughed-up a bit in the final, when she ended-up fifth.

Lady’s Party has been third or better in all nine season starts with five stops at the Hawthorne winner’s circle. She followed her sweep of the Dave Magee Series with a third in the initial Plum Peachy and a second place finish in leg two. She was also the runner-up to Fancy Creek Jolene in the Violet championship.

Open is Just That: This weekend’s $13,500 Open Pace will go as the second race Friday night with six starters and no-clear cut favorite.

Hawthorne’s morning line lists last week’s winner, A Bettors Risk (Kyle Wilfong) at 5-2. The Patron Ode trained gelding was assigned the six-slot. At 3-1 are both Mystical Walter (Casey Leonard) and Coal Hanover (Kyle Husted) and they drew for posts 4 and 5 with the former getting the four.

Kelly D, fresh off six length romp in a high conditioned level has Mike Oosting back at his lines and is at 4-1 with the two post. At 8-1 is Account Hanover (Tim Curtin), allocated the three-slot and KC Rambuctious Boy (Ridge Warren), dispensed the rail for his first start of the meet in the Open.