Next weekend’s Violet and Cardinal stakes races, the first major events for ICF three-year-old trotters and pacers, brought about a unique event on Sunday’s card.

Tonight’s third race will see second season state-bred trotters of both sexes tangle, maybe for the only time this year. The seven-horse field lured the winners of the first round of their respective Night of Champions stake series.

Sunday’s $9,200 third race is a prep for the Violet and Cardinal trots that will be contested a week from today. The Illinois Department sponsored added money events are the first major stakes of the season for ICF pacers and trotters. 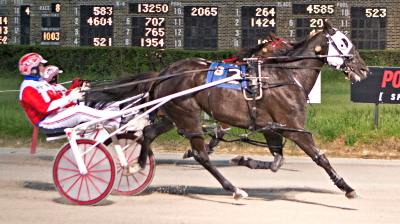 The Illinois bred sophomore filles were allowed to draw inside and that enable last week’s Beulah Dygert victor Loulita (Casey Leonard) to grab the pole position for trainer Steve Searle. The Flacco Family Farms home-bred was much the best a week ago, drawing off by almost three lengths in 1:57.1.

The 2020 Illinois Two-Year-Old Colt Trotter of the Year Fistfullofdollars (Todd Warren) leaves from the five while his Mike Brink trained stablemate Salute The Hero (Ridge Warren) will be on the outside looking in with the seven.

Rndmnudpredicbtle, a first over winner in a division of the Erwin F.  Dygert Memorial opening leg with Casey Leonard, leaves from the six with trainer Steve Searle after Casey opted to guide his stablemate Loulita tonight.

Loulita, last year’s ICF filly trot champion, will open as the prohibitive even-money favorite. The filly has won her last seven starts against strictly other state-breds and another triumph tonight will put her over the $100,000 plateau in her first 12 career starts.

Connie On The Go (Ridge Warren) also preps in the same race for the Violet pace showdown for trainer Jamaica Patton.

Oldie a Goodie: The Terry Leonard Stable’s DJ Lance ($4.60) came away with the top prize in last night’s $20,000 final of the Cicero Claiming Series for colts and geldings.

Casey Leonard gave the DL Lance and second over journey and the 12-year-old veteran responded by wearing down a game effort by the pace-setting Gold Star Lambeau (Ridge Warren) by a half-length in 1:52.3.

DL Lance is owned by Ohioan Tyler George and Charles Groen of Indiana.

One race later the 8-1 longshot Spoxys Girl ($18.80) posted a victory for trainer Dean Eckley in the $20,000 filly and mare division of the Cicero series in 1:52.3. The win was the third of the night for driver Kyle Wilfong.

Husted Shines: It was Kyle Husted who was the driving star of the Saturday program. The 29-year-old Altamont, Illinois native guided five winning horses that included Rock It Out’s triumph in the $12,000 filly and mare Open Pace.

Rock It Out ($27.60) was sent off at 13-1 odds from the seven slot in an eight-horse field however Husted hustled her out and got a pocket trip behind the front-stepping Priceless.

The Donna Holt trained winner proceeded to hold off a fast-closing Maggie Rhee (Todd Warren) by a half-length in 1:52 flat. It was the third straight first place finish for Rock It Out, owned by D & R Racing Stable of Kentucky.

Who Will Claim the Series Top Prize? Cardinal Pace Rich in Tradition
Scroll to top