Homepage
You are here: Home1 / Mike Paradise2 / Up Close Place to be Even with a Long Stretch

When Hawthorne opens its summer harness racing meet on May 6th plenty of handicappers will become fixated on its 1,320 feet homestretch, currently the longest of any racetrack in North America with an extended pari-mutuel meeting.

Many of us like to see a winning horse come from far out of it and mow down a field in time. Passing up half-dozen horses or more in the lane before the finish wire is an exhilarating way to cash a winning ticket.

However, it turns out coming from seventh or farther behind at the half and finishing first at Hawthorne’s winter meet was an uncommon occurrence.

It came about as frequently has a horse winning from Maywood Park’s dreaded 8-hole did, which wasn’t very often. 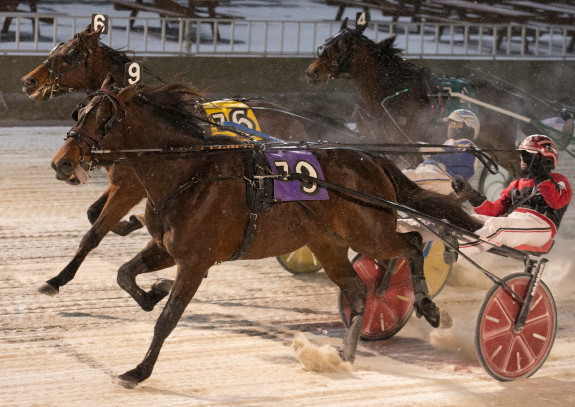 Of the 255 races contested at the winter meet only 20 winners were seventh, eighth, ninth or tenth at the half-mile pole. That’s a winning percentage of only 7.8.

The vast majorities of horses (52.5 per cent), were either on the lead or in second place at the half and went on to win. That success drops down to 23.9 per cent for winning horses who were third or fourth half-way through a race.

That figure dips down to 15.6 per cent for winning horses coming from fifth or sixth at the half. Only 60 winners or 23.4 per cent of the winter meet’s winners came from fifth or farther back at the mid-way mark.

In comparison, more than three-quarters (76.4%), of the 255 winning horses were in the first four positions after the first half of a race.

A lot of things have to go right for a horse to rally past six or more other horses in the last half mile, such as live cover rather than bad cover, an honest pace by others up front, a clear path in the lane, not being blocked or not shaking loose in time, along with other types of traffic problems.

Of course, some horses simply lack early speed and a driver has no choice but to try and come from out of it with his pacer or trotter. Sometimes, these late chargers do rush past in time, but at this past winter’s meet those far back successful rallies, were few and far in between.

Will things be much different in the summer meet? Perhaps, but are you willing to bet on it?

Noms Due Soon: A reminder to horsemen that nominations are due by April 15th for Hawthorne’s ten Late Closer events, while its summer claiming series must be postmarked no later than May 1st. All series will carry an entry fee of $200.

Nominations for the Night of Champions ICF two-year-old stake season are due on April 15th, at a cost of $1,250. Horsemen will also be able to supplement to these stakes for $2,250 by May 15th. Supplemental nominations for the three-year-old crop of state-bred pacers and trotters is also due on May 15th for a fee of $2,750.

Aged stakes for the Night of Champions require only a $500 payment at the time of entry for their respective event.