Homepage
You are here: Home1 / Mike Paradise2 / Variety and Abundance This Weekend 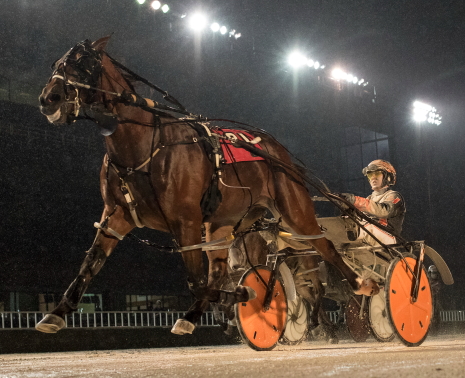 There’s a whole assortment of interesting races on the horizon this weekend at Hawthorne and they range from low-end Mini-Series events all the way up to the first major stake races of the summer for ICF pacers and trotters.

The weekend’s pinnacle of the racing spectrum is the Cardinal and Violet stakes, with the pacers grabbing the public eye on Saturday. The state-bred second season trotters take over center stage on Sunday evening when they square off for their own $40,000-plus pots.

The Friday feature was to be an $8,800 Open II Handicap Pace but when a less than expected seven eligible horses were entered it was scrapped. Instead we have co-features tonight, a pair of conditioned paces primarily for non-winners of $4,000 (ICF $5,000). Both $6,500 events have full 10-horse fields and don’t let the moderate pot fool you because there are plenty of good horses in the two fields.

In fact, of the 20- horses going postward in the co-headliners, three-quarters of them (15) have competed in Open Paces or higher this year or last, and with no stick-out in either contest it makes for some very competitive slugfests.

Popular Event: Leg two of the Club Hawthorne Mini Series for pacing colts and geldings saw such an abundant number entries (35) that it had to be split into four divisions. They’ll go tonight as races one, three, six and eleven with $5,000 purses. A small $25 entry fee, along with being a non-winner of $750 (ICF $940) per start in 2019 and 2020 combine, got a horse a starting berth.

Pay to Play: It’ll take a $400 entry payment along with an earlier $200 nomination fee to compete in the Cardinal and Violet stakes either on Saturday or Sunday. The Violet for three-year-old Illinois pacing fillies carries a $43,300 purse while the Cardinal pacing colts and gelding stake offers a pair of $21,450 purses.

Trio of Showdowns: Three Late Closer pacing finals will be scattered throughout Saturday’s program, the $14,800 Bob Larry Pace, the $12,800 Walter Paisley and the Dave Magee. Also on the Saturday card are the first legs of the Cicero ($10,000) Claiming Series, each with a $10,000 purse.

Looking Good: Last Sunday’s handle was another good one. Over $1.25 million was wagered on another 13-race card. The first Sunday handle since the restart of racing saw $1.5 million go through the Hawthorne mutuel system.

Mighty Nice Return: On Sunday we had another Mike’s Price Shot” winner when Mighty Tony Mac (Travis Seekman) popped at a $20.20 mutuel in race seven. Our other two price shots Fox Valley Mundo and Kinda Like Kori, finished second at 9-1 and third at 7-2 in their respective races.

Bob Molaro Updated Obit Who Comes Out on Top This Time?
Scroll to top