One of the drawbacks to not having a longer Illinois harness racing season is that it puts a lot of pressure on trainers to get their “babies” ready to race in a hurry and once they go postward then it is one ICF stake event after another without much rest for their youngsters in between.

Tonight’s state-bred trotters go to the starting gate with $45,000 pots on the line in divisions of the Cardinal for “the boys” and the Violet for “the gals.”

It was just two weeks ago most of tonight’s stake hopefuls made their pari-mutuel debuts in the opening Night of Champions rounds and next Sunday most of these youngsters will be competing in the second legs of the Fox Valley Flan filly series or the Kadabra for colts and geldings.

The Springfield State Fair is right around the corner, and it’s followed shortly by the Du Quoin State Fair with its prominent Illinois bred stake events for freshmen trotters and pacers. 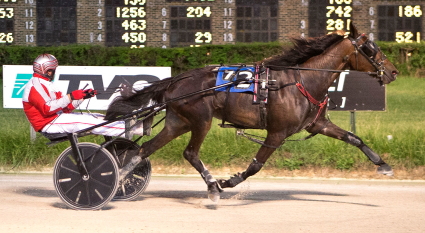 Funky Wiggle (Curt Grummel) was much the best in her Fox Valley Flan victory and will open as the 4-5 favorite in Sunday’s second $45,000 Violet stake for ICF freshman filly trotters, (Four Footed Fotos

And then we are into the September with more Night of Champion series events followed by its lucrative finals on September 25th, Hawthorne’s gala evening of its meet.

As history tells us, a lot can happen between now and mid-September.

You might remember that last year’s Kadabra champion Fistfullofdollars didn’t make his debut until mid-August. And two seasons ago the Incredible Finale conqueror He’zzz A Wise Sky waited until the first week of August to make his initial career start.

With that being said, all four first leg winners of the trotting Night of Champions series—Chief Illini and First And Goal in the Kadabra and Armbro Lark and Funky Wiggle in the Fox Valley Flan—won with authority and likely will be heavy favorites in Sunday’s Illinois Department of Agriculture’s stakes state-bred events.

In my opinion the most eye-catching victory in first ICF stake events was Funky Wiggle’s victory with trainer Curt Grummel in the sulky. The homebred winning margin was more than 10 lengths, and it appeared the daughter of Lou’s Legacy had more left in the tank at the end of her 2:00.2 mile.

Grummel quickly took Funky Wiggle to the front in her Fox Valley Flan outing, and with no challengers, cruised to leisurely fractions of 31.2, 1:02.2 and 1:33. It was almost a certainly the Dr. Patrick Graham owned and bred filly would have plenty of go left for the stretch drive, but the same could be said for most of the rest of the field, less than two lengths behind at the three-quarter pole.

However, when Curt asked Funky Wiggle filly to quicken her stride, the young filly responded in a big way and pulled away from her challengers with a 27.2 final panel, a notable quick quarter for a freshman filly trotter making her first start.

Charles Arthur Armbro Lark was also much the best in her Fox Valley Flan winning debut, as her 4-5 programmed odds might indicate. She leaves from post three in the fourth race first Violet split with Rita’s Legacy, Fern B, Hot Trotn Trixie, Creations Dream MV, Lous Xanadu and BC’S Kim as her challengers. 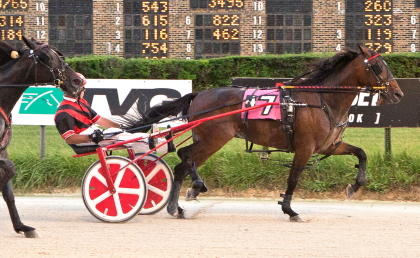 Chief Illini, trained and driven by Rick Schrock, is listed at 6-5 in the first Cardinal division. The Cassis gelding will be tested this time by Loyzhonkeytonkhero, Mr Mizzlou, Fox Valley Cairo, Lousdobb, Upfront Flight and Romantic Warrior.

The Herman Wheeler Stable’s First And Goal (Casey Leonard) came out ready with a three and one-half triumph in his Kadabra leg to rate as the even-money choice in the sixth race second Cardinal contest.

Sit back and enjoy the show. I know I will.

Five Bagger for Atlee: Driver Atlee Bender had himself a memorable Saturday night. The 29-year-old Goshen, Indiana native visited Hawthorne’s winner’s circle five times including a stop with Fox Valley Captiva after she captured the $45,000 second division of the Violet stake for two-year-old ICF pacing fillies.

Fox Valley Captiva was one of three youngsters sent off at 2-1 odds in her Violet division and she proved to be the fastest in the stretch, coming from more than five lengths off the leader at the three-quarter pole to prevail by more than two lengths in 1:57.3 on a sloppy racing strip.

The other co-favorites in the race, Apple Valley and Swanky Diamond, finished second and third, respectively.

A few events earlier the Roshun Trigg filly Rollinroz, confidently handled by Archie Buford, pulled away to a three-length triumph in her 1:57.3 mile.

Buford used Rollinroz a couple of times in the race, sending her out from the six-spot and into third in the early going and pulling her out on the backside. The Fort Knox filly raced outside of the heavy 1-2 favorite Rmissashlee through the third quarter before pulling way while the public’s choice faded to a sixth-place finish.

Violet Contest a Toss-Up or Not? Those ICF Baby Fillies are Back
Scroll to top