The road to becoming an ICF 2-year-old filly champion begins Saturday night with the Violet pace. With an even dozen entries the freshman distaff take was split into a pair of six horse fields with $23,675 pots.

The Hawthorne morning line has Yankee Joanie at 6-5 after her winning 1:58.3 debut last week and Foolishlittlegirl, trained by former Illinois based trainer Dirk Simpson at 9-5. I have it the other way around in my line as far as the likely favoritism. 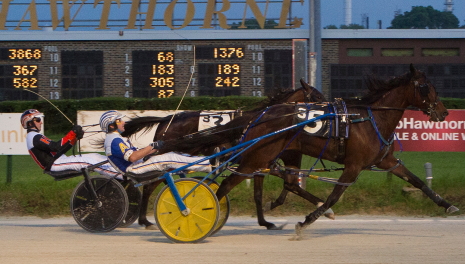 Foolishlittlegirl had two very solid quarters on the five-eighths track at The Meadows, winning both with Simpson in the bike. On May1st she won in 1:57.4. Six days later she proved best in 1:59.1 but don’t be deceived by that time. The winning filly took a two-hole trip behind the pace-setter who only went to a 1:01.2 first half.

Foolishlittlegirl is a daughter of Richess Hanover out of the Sportsmaster dam Fox Valley Estelle, making her a full sister to 2019 Orange and Blue Super Night champion Dutch Richman (1:50, $384,517) for trainer Erv Miller.

Fox Valley Estelle is also the dam of Zall Good, another 1:50 pacer a few years back for Erv.

The fourth race second Violet split the Hawthorne program lists the Jamaica Patton trained filly Flipfloppinflossie as a heavy 6-5 favorite after her 1:59.1 six days ago at Springfield. She drew nicely for Jamaica with the two slot.

Listed next at 2-1 is the Nelson Willis first-time starter Fox Valley Halsey (pp 5, Casey Leonard). She paced in 1:59.1 in her June 7th qualifier at Hawthorne with a 27.4 last quarter. 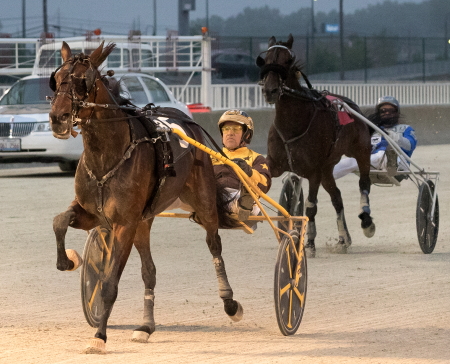 Anna’s Lucky Star (Mike Oosting) from the barn of trainer Nelson Willis, goes after a second straight Open trot triumph in the third race. Kyle Wilfong will over the lines on the ICF mare tonight. (Four Footed Fotos)

Sandwiched between the two Violet filly stakes is a $10,000 Open Trot drawn by groups with recent Open I winners Picky Picky Valor (Casey Leonard) and Anna’s Lucky Star (Kyle Wilfong) landing the two outside posts, the 5 and 6 in that order.

Tonight’s second $23,775 Violet stake division will be followed by another $10,000 Open. This one is for filly and mare pacers and it attract ted an eight horse field, again drawn by groups.

The 7 and 8 posts were drawn between last week’s Open winner Phyllis Jean) and the ultra-consistent mare Narcian Jewel (Tyler Shehan) who ended up on with the outside 8- slot.

Cardinal Freshmen Pace: Holden Steady (Kyle Wilfong) and The Bucket (Casey Leonard) came away with victories in their respective $24,100 divisions of the 2-year-old Cardinal stake for ICF pacing colts and geldings e last night. Both youngsters were making their pari-mutel debuts.

Holden Steady ($4.20), trained by Angie Coleman, led at every pole in his 1:59.4 winning mile for Canadian owners Thestable Holden Steady. The 40-1 longshot Sony Sage (JD Lewis) was second, beaten one length and Riley The Moose (Gary Rath) came a long way to rally for third.

Casey Leonard gave The Bucket ($5.60) a pocket trip and the Ken Rucker trainee took advantage of it and drew off my 3 and 1/2 lengths in his 1:57.1 mile. The Sagebrush colt is owned by Rucker (Muncie, Indiana) and George Dremones (Oak lawn, Illinois).

The paces-setter Frontier Muffler (Freddie Patton Jr.) was second best while Meyer On Fire, who made a break early on the backside, still finished third.